A Jurassic World: Dominion preview is set to play ahead of IMAX screenings of Fast and the Furious 9. Jurassic Park star Sam Neill broke the news when he tweeted the new Dominion poster, which promises a five-minute preview for those who go and see Vin Diesel and his ragtag team save the world using cars.

The new Jurassic World poster shows a mosquito drinking from a dinosaur, in an obvious call back to the origin of the cloned dinosaurs and John Hammond’s iconic amber cane. Emblazoned on the poster are the words “it all started here”. According to Empire, the teaser will take us back to a time before humans existed and tell the origin story of how dinosaur DNA first came to be carried by a mythic mosquito. Not only that, we’ll see seven types of dinosaur never been seen in the Jurassic films before.

Director Colin Trevorrow tweeted a picture of one of these new dinosaurs, a little t-rex looking thing, along with one word, “feathers”. Yes, “feathers”. That’s right, after years of palaeontologists and dino nerds complaining about the Jurassic film dinosaurs not having feathers, the science has finally caught up to the movies.

Speaking to Deadline, Trevorrow said: “Ever since I was a kid, I have wanted to see dinosaurs in their natural habitat. “It may have taken a few decades, but with a little help from ILM, Universal and Amblin, it has finally happened. This Preview is just a glimpse of the film we’ve made. It’s an epic celebration of everything Steven Spielberg and Michael Crichton created, and I can’t wait to share it with the world next summer.”

Exact plot details about Jurassic World: Dominion are being kept more secret than the method for cloning dinosaurs, but we can make a few predictions. The film will likely tackle the end of Fallen Kingdom, which saw the dinosaurs finally escape the island and make their way out into the wider world. Can humans and dinosaurs co-exist? Well, we doubt it having seen the Battle at Big Rock, but it’ll be fun to see them try.

Dominion, the third film in the Jurassic World trilogy, will see Chris Pratt and Bryce Dallas Howard return as Owen Grady and Claire Dearing, respectively. They aren’t the only stars returning, though. The three leads of the original Jurassic Park, Sam Neill, Laura Dern, and Jeff Goldblum, are all back to be terrorised once again by dinosaurs.

If you want to watch the Jurassic World: Dominion preview, you can catch it when it drops with Fast 9 on June 25, 2021. If you need a refresher on those films be sure to check ut our guide on how to watch the Fast and the Furious movies in order. 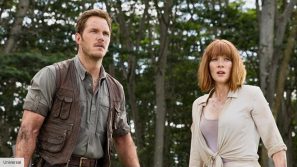