The winners of the 30th British Academy Cymru Film and Television Awards were announced yesterday and Gareth Evans’ Gangs of London was the big winner of the night, with four awards. Russell T Davies‘ It’s a Sin won two.

Gangs of London has been a hit for Sky Atlantic and the AMC network in the US, with AMC becoming a co-producer of the upcoming second season. Welsh director and now showrunner Gareth Evans is known for his Indonesian action films The Raid and The Raid 2. Gangs of London brought Evans’ brutally violent action style to this tale of rival international gangster families in the capital city. Gangs of London won awards for photography, production design, sound and editing.

Russell T Davies (best known for Doctor Who, of course) was also a winner for his story of the 1980s AIDs crisis, It’s a Sin. Best Actor went to Callum Scott Howells and Best Writer was won by Davies himself. The Pembrokeshire Murders won two awards – for Best Television Drama and Best Director – Fiction for Marc Evans. The HBO/Sky Atlantic series His Dark Materials won Best Costumes, for designer Caroline McCall.

In the world of film, Morfydd Clark won Best Actress for Rose Glass’ critically-acclaimed horror film, Saint Maud. Glass’ directorial debut is about a young woman, a newly-converted devout Catholic, who nurses a terminally-ill ex-dancer (Jennifer Ehle). It was nominated for Outstanding British Film and Outstanding Debut Film at the ‘main’ BAFTAs.

The award for Best Film went to Craig Roberts’ sophomore feature (as writer-director) – Eternal Beauty – which stars Sally Hawkins and David Thewlis. Roberts is also known as an actor, whose breakthrough role was in Richard Ayoade’s Submarine. His most recent film, The Phantom of the Open, appeared at the London Film Festival, which ended on 17 October 2021.

The BAFTA Scotland winners will be announced on 20 November 2021. 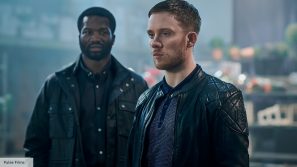 Gangs of London season 2 release date, trailer, cast, and more
Get involved Continue the conversation over on The Digital Fix Forum