August 19, 2021 The original story contained a mis-translation of Italian to English, and has been updated accordingly.

We’re not far off Denis Villeneuve’s Dune, and the science fiction movie director has mentioned his plans for a sequel. If we get another Dune, the plan is for Zendaya to take a more prominent role.

This comes from an interview Villeneuve conducted with Italian entertainment magazine Il Venerdì di Repubblica. At first, a translation circulated that says Zendaya would be the protagonist. “I can’t wait to shoot the second part of Dune to get [Timothée Chalamet and Zendaya] back together,” Villeneuve says. “Knowing that in the next chapter Zendaya will have a major role in the film.”

Zendaya is of the leads, alongside Timothée Chalamet’s Paul Atreides. In Dune, Zendaya plays Chani, Paul’s the love interest. She’s a native to Arrakis, the planet full of spice and sand worms where a majority of the Dune’s action is going to take place. Thus, it makes sense to play on the two perspectives if you’re doing a two-parter, giving us the history of House Atreides through Paul’s eyes in part one, then showing us more of the Fremen who live on Arrakis in part two. This also implies that the cast are signed up for a sequel, should one be greenlit.

Alongside Chalamet and Zendaya, Dune stars Oscar Isaac, Jason Momoa, Josh Brolin, David Dastmolchian, Rebecca Ferguson, and Dave Bautista. Adapted from the novel by Frank Herbert, it concerns a war over spice, a drug that allows long-life and heightened intelligence and such, and is only available on one place: Arrakis. You can see how this would make things complicated.

Dune premieres at the Venice International Film Festival on September 3, followed by theatrical release in UK and US on October 22. Here’s the best fantasy movies, and the best sci-fi series, to keep you occupied. 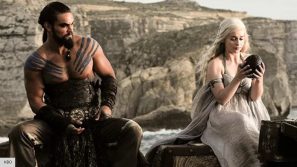