You may be aware that social media is currently blowing up with photos and videos taken by passers-by from the Venice Beach set of Greta Gerwig’s Barbie. Due to the public nature of this part of the shoot, photos of Margot Robbie and Ryan Gosling roller-blading in Day-Glo spandex outfits have been flooding Twitter. And one of the behind-the-scenes photos of Ryan Gosling revealed that he was wearing a T-shirt with Ncuti Gatwa’s Doctor Who on it, and Whovians could not be more delighted.

Russell T. Davies has now weighed in on Instagram, posting some comments from ‘The Old Bailey’ and issuing Ryan Gosling a cease-and-desist. His first post read; “This is, genuinely, Ryan Gosling wearing a T-shirt of Ncuti Gatwa as Doctor Who! We’re suing him, of course. Illegal merch.”

Ryan Gosling definitely has certain interests that he’s passionate about – the Haunted Mansion ride at Disneyland being one, and Doctor Who clearly being another. Or maybe Gosling was just supporting Gatwa – who is a member of the vast cast of Barbie. It’s easy to forget who is in the movie, because the cast-list includes (deep breath) Will Ferrell, America Ferrera, Issa Rae, Simu Liu, Kate McKinnon, Emerald Fennell, Michael Cera, Scott Evans, Sharon Rooney, and Kingsley Ben-Adir.

The filming of the 60th anniversary special has already taken place, with David Tennant and Catherine Tate returning for the event. Heartstopper’s Yasmin Finney has been cast as the new Doctor’s companion, and the special will presumably involve the handover from Jodie Whittaker to Gatwa.

While we wait for more updates on the new Doctor, check out our guide to the best sci-fi series. 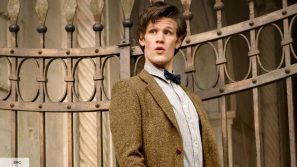