David Cronenberg is returning after an eight year hiatus with what looks like the most Cronenbergian horror movie possible. While the Canadian director is primarily associated with body horror, he hasn’t really dipped his toe into that well since 1999’s eXistenZ. Crimes of the Future sees Cronenberg re-teaming with Viggo Mortensen, who he worked with on A History of Violence and Eastern Promises.

The cast also includes Oscar nominee Kristen Stewart, and No Time to Die’s Léa Seydoux. The trailer opens with Saul Tenser (Mortensen) lying on what looks like a dentist’s chair. Seydoux’s surgeon Caprice is looking into Tenser’s stomach to check on a “brand new organ, never before seen.” Seydoux’s voiceover says; “We’ve all felt that the body is empty. Empty of meaning. And we’ve wanted to confirm that, so that we could fill it with meaning.”

A man’s voice says; “The world is a much more dangerous place now that pain has all but disappeared.” And Timlin (Kristen Stewart) can be seen whispering in Tenser’s ear; “Surgery is sex, isn’t it? You know it is. Surgery is the new sex.”

There are various shots of the main characters, um, performing surgery on each other – this is a red band trailer, so be warned. Seydoux says; “Let us not be afraid to map the chaos inside. Let us create a map that will guide us into the heart of darkness.”

If you have a strong stomach, you can watch the trailer, which comes with a content warning, below;

Crimes of the Future will premiere at Cannes Film Festival, before being released in theatres on June 3. The synopsis is as follows; “As the human species adapts to a synthetic environment, the body undergoes new transformations and mutations. With his partner Caprice (Léa Seydoux), Saul Tenser (Viggo Mortensen), celebrity performance artist, publicly showcases the metamorphosis of his organs in avant-garde performances. Timlin (Kristen Stewart), an investigator from the National Organ Registry, obsessively tracks their movements, which is when a mysterious group is revealed… Their mission –to use Saul’s notoriety to shed light on the next phase of human evolution.”

If you’re a fan of all thing gruesome and grotesque, check out our guide to the best 2021 horror movies.

Crimes of the Future
Horror Science fiction Movies
Read next 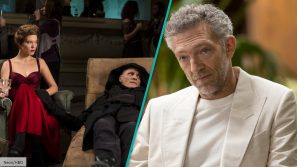 {"schema":{"page":{"content":{"headline":"New Cronenberg movie trailer dials up the body horror to eleven","type":"news","category":"crimes-of-the-future"},"user":{"loginstatus":false},"game":{"publisher":"","genre":"Horror","title":"Crimes of the Future","genres":["Horror","Science fiction","Movies"]}}}}
We sometimes include relevant affiliate links in articles from which we earn a small commission. For more information, click here.
Trending in Movies