In 1994 Kevin Smith released the black and white comedy movie Clerks, and now 27 years later, his highly anticipated follow up, Clerks 3, will be pushing for nostalgia. During an interview with Comicbook.com, the director revealed that the new instalment will be filmed in both black and white, and colour – directly nodding to the original ‘90s movie’s aesthetic.

Clerks 3 revolves around Randal Graves (Jeff Anderson), who, after a heart attack, decides to make a movie with his best friend, Dante Hicks (Brian O’Halloran), about their time at the infamous Quick Shop. The story is the latest entry in the cinematic comedy series revolving around the two, whose relatable situation, everyday lifestyle, and solid humour have earned a massive cult following over the years.

One of the defining factors about the original movie was its grainy black and white look, which matched the rest of the film’s down to earth, and authentic vibe. Clerks 3 began filming on Smith’s 51st birthday earlier this month, and according to the director, will be paying tribute to the 1994 film in both its look, and with a ton of direct references.

“It’s both [black and white and colour]. The premise of the movie, of course, is that they make a movie, so the movie they make is in black and white. The movie’s in colour, but [it’s black and white] when they shoot their version of Clerks — which is called Inconvenience,” Smith explains. “That was the original title for Clerks. … The black and white movie they’re making is called Inconvenience, that’s their version of Clerks. There’s a lot of us replicating the scenes that you know insanely well from Clerks, and the beautiful thing is they’re replicated with all the same people, and we’re all so f**king old.”

Currently, no release date has been confirmed for Clerks 3. Stay tuned for updates. In the meantime, here is our list of the best adventure movies for some top tier escapism. 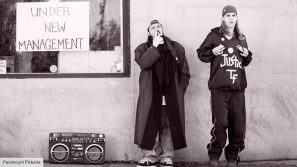