Post-production is rolling along for comedy movie Clerks 3, but we won’t be seeing it for a while yet. On his podcast Fatman Beyond, writer and director Kevin Smith says it’ll be the backhalf of 2022, by his estimation.

Smith is currently editing the feature now, and it’s coming together. He believes distributor Lionsgate is planning for something around summer or autumn 2022. “We are down to one hour 34 minutes. I have the titles in the opening sequence now, it was almost like a music video until now,” Smith says. “It’s gonna be a minute before the rest of the world gets to see it. Clearly, it ain’t gonna be out in 2021. Somewhere between mid-to-late 2022, I assume. I know nothing, I’m just assuming, because we’ll be done by then.”

The Clerks threequel was announced earlier this year, and Smith managed to shoot the whole thing this summer, using the Quick-Stop sets from the original. In August, production had wrapped, and Smith’s been working away on the edit since. These things take time, of course, but Clerks 2 was in 2006, so we’re all a little excited about seeing the next installment, finally.

Conceptually, Clerks 3 borrows from Smith’s lived experience. Brian O’Halloran’s Dante has a heart-attack, and asks all his friends, chief among them being Jeff Anderson’s Dante, to help him make a drama movie about his life.

Many View Askewniverse regulars are returning, including Rosario Dawson, Marilyn Ghigliotti, and, naturally, Smith himself and Jay Mewes are playing franchise mascots Jay and Silent Bob. Liz Destro and Jordan Monsanto are producing alongside Smith.

While we wait for more from Clerks 3, here are the best movies based on a true story. 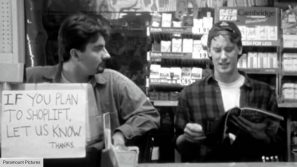 Kevin Smith says Clerks 3 will be in black, white, and colour
Get involved Continue the conversation over on The Digital Fix Forum