Horror fans have been delighted with the recent return of one the most beloved villains of the genre – the demon doll Chucky – this time in TV series form. And actress Jennifer Tilly has teased that the show is only going to get more “bonkers” from here.

In an interview with TVLine, Tilly discusses how she assumed that her character Tiffany would only be getting a cameo in the show; “When [Don] was doing the Chucky television series, I honestly thought I’d be strolling through. I’d show up, smoke a cigarette, snuff it out and leave, and everyone would be like, ‘Was that Tiffany?’” says Tilly. “Don said, ‘No, I wrote a really big part for you!’ When I got [the script], I was so excited! Don loves Tiffany, and he gets really excited, too. It’s very infectious.”

Tilly first appeared in 1998’s Bride of Chucky, where Tiffany was killed off. She reappeared in Seed of Chucky, playing herself as she was stalked by various dolls and possessed by a Tiffany doll. She continued making cameos in the movie series.

The Chucky TV series stars Brad Dourif, reprising his role as the voice of the titular character, alongside Fiona Dourif, Alex Vincent, Christine Elise McCarthy, and obviously Jennifer Tilly returning in their roles from the previous films.

In the interview, Tilly is effusive in her praise of co-star Fiona Dourif; “I love working with Fiona, she’s so f–king talented. She’s so great with improv. If I throw something at her, she’ll throw it right back. I show up on set in my high heels, smoking a cigarette, and [Dourif’s] throwing herself around, crying and falling on the floor and screaming. I go, ‘Thank you, Fiona, for carrying the scene. I really appreciate it!’”

And Tilly builds anticipation for the rest of the series; “The s–t hits the fan. It becomes absolutely bonkers. It’s not a little mischief, it’s havoc and mayhem. It’s spectacular!”

Chucky is available on SyFy and the USA Network in the US at the moment, with hopefully news of how to watch it in the UK coming soon! 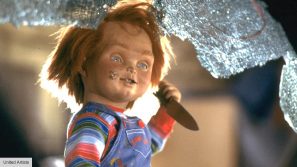 Chucky in space would be a “fun movie”, creator says
Get involved Continue the conversation over on The Digital Fix Forum