September 14, 2021 Deadline reports that Nolan has signed a deal with Universal for his next movie.

Christopher Nolan has reportedly closed a deal to make what may be his most explosive project yet. According to Deadline, Nolan is following up his high concept thriller movie Tenet with a biopic set during WW2 about “the father of the atomic bomb”, J. Robert Oppenheimer. Instead of going straight to Warner Bros, he’s working with Universal, who’s financing and distributing the picture.

Nolan has made some of his best movies with Warner Bros, so it’s a surprise to see the studio not snap us his latest script. It’s thought that the recent furore surrounding Warner’s plan to release its entire 2021 movie slate in theatres and on the streaming service HBO Max on the same, without forewarning anyone, may have soured Nolan’s relationship with the studio.

The Memento director has been an outspoken defender of the theatrical experience since this plan was announced. “Some of our industry’s biggest filmmakers and most important movie stars went to bed the night before thinking they were working for the greatest movie studio and woke up to find out they were working for the worst streaming service,” he told The Hollywood Reporter at the time.

“Warner Bros. had an incredible machine for getting a filmmaker’s work out everywhere, both in theatres and in the home, and they are dismantling it as we speak,” he continued. “They don’t even understand what they’re losing. Their decision makes no economic sense, and even the most casual Wall Street investor can see the difference between disruption and dysfunction.”

Deadline reports that the plan is for the film has been greenlit, and the plan is to start shooting early next year. No casting has been announced yet, but Cillian Murphy, who worked with Nolan on his Batman movies and the war movie Dunkirk, is believed to be interested in starring. 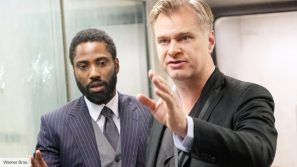