It’s an age-old question that sends a shiver down the spines of cinephiles booking movie tickets with friends the world over, ‘where do you want to sit?’ Multiplex veterans tend to have their own favourite spot in the cinema that is almost never the back row which for some reason holds power over more casual theatregoers.

Quite what compels people to want to sit right under the projector window, I will never know, but it’s clearly some holdover from our teen years where sitting at the back was, for whatever reason, seen as cool. Well, we’re here with a public service announcement for you, dear reader, to get you out of having to endure substandard cinema seating. There really is a ‘best seat’ in the house when it comes to going to the movies.

According to Popular Science Magazine, you want to be sat as close to the centre of the screen as possible. This means when you’re booking your seat for the next Marvel movie, you’re aiming for the 2/3 rows slap bang in the middle of the aisle.

Why’s this the optimum spot? Well, according to Joe Muto, head projectionist for Nitehawk Cinema, “This way your eyes are more centralized and not straining to catch things on the very left or right side of the image on screen.”

Now it’s worth saying this only specifically applies to traditional double exit cinemas. If you’ve paid for the IMAX experience, the specially designed auditorium means that you’ll have a great time wherever you sit.

“We have a patented design for our theatre geometry,” explains Brian Bonnick, chief technical officer for IMAX. “We start off with a screen that goes from wall to wall, floor to ceiling, as opposed to having – in most theatres – a frame around it. The second step is that the seating deck is stadium-style, and it’s much closer to the screen. So your field of view becomes much larger from any seat in the theatre.”

That said, Bonnick still tries to apply the 2/3’s rule whenever he can, so if you’re booking a trip to the cinema soon, try and get a seat there. 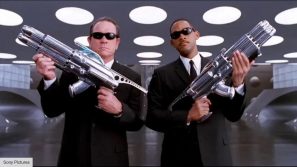