All good things must come to an end, and Supergirl is officially done filming for good. The Arrowverse show wrapped on its final season this month, and star Melissa Benoist commemorated the occasion.

Posting on Instagram, Benoist, who plays Kara Danvers, shared a picture with costars Chyler Leigh and Dave Harewood, who play Alex Danvers and the Martian Manhunter, respectively, thanking them for all the good times together. “Thank you for an incredible six years,” the caption reads. The cast who became family, everyone who worked on the show, all of you who watched us week after week. That’s a wrap on Supergirl.”

It was announced back in September 2020 that the upcoming sixth season would be the last for the sci-fi series. Due to Covid-19, production was delayed numerous times, and a typical premiere date in October was shifted several months, the season starting in March instead. Thus, the last episodes only finished recently, just ahead of the mid-season return. A trailer for the backhalf teased a cryo-nuclear bomb. Exciting times!

Supergirl follows Arrow in exiting the Arrowverse, leaving DC’s small screen franchise in the capable hands of The Flash, DC’s Legends of Tomorrow, Batwoamn, and Stargirl. Oh, and Kara’s cousin Kal-El, in Superman and Lois, which only started this year.

We’ll just have to wait and see what adventures await Kara in her farewell season. For more from DC’s finest, here’s the DCEU in order, and for televisual entertainment, here’s the best TV series on Netflix. 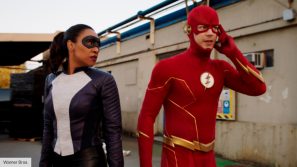