Kelsey Grammer has told fans at a recent public appearance that he would “love to do Beast again.” With the X-Men now being enveloped into the MCU, it will certainly be interesting to see what the casting of some beloved characters, such as Professor X, Magneto, Jean Grey, Mystique and Storm will be like; and if any of the actors from the 2000s or 2010s will be returning.

We don’t know much about the direction the MCU will be taking the X-Men in yet. Quicksilver being played by the X-Men actor Evan Peters (not the MCU actor Aaron Taylor-Johnson) in WandaVision certainly got tongues wagging. That is until he was revealed be an actor and imposter.

Doctor Strange in the Multiverse of Madness could be when Marvel finally decides to start on the X-Men’s transition into the MCU, as rumours have suggested that Professor X will make an appearance in that film, along with a few other mutants.

The 66-year-old Grammer said, at the public appearance in New Jersey; “I‘d love to do Beast again. Nobody’s really talked to me about it. I think maybe they’re gonna try to do another one.” He cheekily added; “I’m assuming that they would go with, you know, the first is the best.”

Grammer is best-known for playing the character of Frasier Crane for over twenty years, in the sitcoms Cheers (1982-1993) and Frasier (1993-2004). A revival of Frasier is currently in the works at Paramount Plus.

The Hank McCoy (AKA Beast) of the comics has animalistic physical characteristics. These include blue fur, both simian and feline facial features, pointed ears, fangs, and claws. Beast also has great physical strength and heightened senses. Despite his feral appearance, he is depicted as a brilliant, well-educated man and is known for his witty sense of humour. He is a world authority on genetics, the X-Men’s medical doctor, and the science and maths instructor at the Xavier Institute.

It remains to be seen if Beast will a X-Men character revived within the MCU and if he’ll be played by Kelsey Grammer, Nicholas Hoult or someone entirely new. 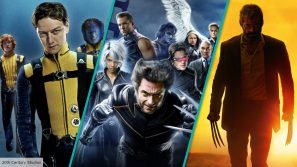 X-Men movies in order: the complete X-Men timeline
Get involved Continue the conversation over on The Digital Fix Forum