Henry Cavill has been speaking to GQ about his similarities to Geralt in Netflix’s The Witcher and about expanding on the “wisdom and intelligence” of the character in season two.

Speaking of Geralt, he says; “The life of an actor can be very isolated. I tend to be a reasonably private person. And so when it comes to playing Geralt, I was no stranger to the idea of being the solo nomad-like traveler, going from place-to-place. That’s something I’ve been doing for 20 years now. So that aspect of Geralt was definitely easy to tap in to.”

Cavill also gave some insight into where he’s taking Geralt in season two; “I think with season two of The Witcher, my focus mainly lay with making sure that the Geralt of Rivia from the books was really shining through in my performance in the show.”

“In season one, there was a deliberate choice of mine to be less verbose, because I didn’t have the luxury of the show being dedicated purely to Geralt. So, you don’t have that swathes of nuanced and complex dialogue which you have in the books.”

Continuing to speak about his portrayal of Geralt in season one, Cavill says; “So I thought okay, how do I reflect Geralt’s intelligence and his wisdom? And I figured, if I actually do the man who listens more and watches more and sometimes – for some light comedic moments, makes a judgmental noise or two, when someone’s finished waffling or pontificating – then it might represent the character a little better.”

He has taken a slightly different approach to the character in season two, however, as Geralt is in a different place in his life; “The advantage of going into season two is that I actually wanted to make sure that that book Geralt shined through a bit more. Especially now that we have him in a personal environment – he’s with Ciri, who becomes his ward and ultimately a daughter-like figure to him and then we’re with his Witcher kin and his father-like figure Vesemir.”

He continues; “So, at that stage, he doesn’t have to have the walls up, he doesn’t have to be so closed off and I wanted to really reach into it and make sure he had a more expanded vocabulary and that he sounded more intelligent. That he came across as someone who had the wisdom of between 70 and 90 years. For me, that was real focal point of season two.”

In the video, Cavill discusses some of his other well-known characters; including Sherlock (Enola Holmes), August Walker (Mission Impossible: Fallout), Napoleon Solo (The Man From UNCLE) and someone called Clark? Kent? Never heard of him. 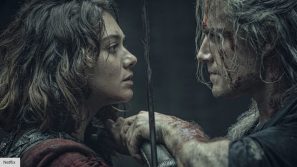 The Witcher: Blood Origin has wrapped filming
Get involved Continue the conversation over on The Digital Fix Forum