New Western The Harder They Fall is available on Netflix from today. The film has a large ensemble cast of stars including Idris Elba, Regina King, Jonathan Majors, Zazie Beetz, Delroy Lindo and Lakeith Stanfield. It debuted at London Film Festival, where it received positive reviews.

The official synopsis reads; “Gunning for revenge, outlaw Nat Love saddles up with his gang to take down enemy Rufus Buck, a ruthless crime boss who just got sprung from prison.”

It is directed and scored by Brit Jeymes Samuel, who is also a singer-songwriter known as The Bullitts. While the story is fictional, many of the characters are named after real-life cowboys – including Nat Love (Jonathan Majors), who wrote an autobiography published in 1907. Another is the first Black Deputy Marshal – Bass Reeves (Delroy Lindo) – a revered lawman for three decades. He was known for his walrus moustache and being a sharpshooter.

The critical consensus on Rotten Tomatoes is; “It isn’t as bold and fearless as its characters, but The Harder They Fall fills its well-worn template with style, energy, and a fantastic cast.”

The New York Times review speaks of the charm of Majors and the charisma of both Elba and King. It also emphasises the violence and discusses sequel potential; “the violence walks the line between stylization and sadism. The bodies pile up at the end, but there are enough people still existing to tease a sequel.”

Matt Zoller Seitz highlights the visuals in his review for rogerebert.com; “The movie succeeds as pure spectacle, turning light, color, and motion into sources of pleasure.” He also says that it is more suited to the cinema screen than TV; “it was plainly conceived with a movie house in mind. Samuel uses a very wide screen to frame shots that employ a lot of negative space.”

The Western has had something of a resurgence in recent years with the Coens’ The Ballard of Buster Scruggs and Paul Greengrass’ News of the World (both available on Netflix in the UK), as well as Jacques Audiard’s The Sisters Brothers. However, it looks as though Samuel has brought something fresh to the genre, focusing on a long-overlooked perspective.

The Harder They Fall
Thriller Western Netflix Movies
Read next 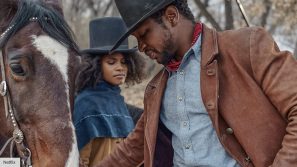