Who knew that Tom Hanks was a Trekkie? Well apparently, he very much is and ‘almost’ appeared in a Star Trek film.

Star Trek: First Contact was released 25 years ago, in which the role of Cochrane was taken by James Cromwell, who had already appeared in the Trekverse (that’s a word, right?) as a different character. However, rumor has long held that, at one point, the film’s creators had another actor in mind for the role of Cochrane: the Oscar-winning actor and apparent Trekkie Tom Hanks.

After the film’s release, producer Rick Berman acknowledged the rumour, saying that scheduling didn’t work and director/star Jonathan Frakes noted that he felt casting such a big star in the role would have been a mistake.

In a new interview with The Hollywood Reporter, the co-writer of the film – Ron Moore – has played down these rumours, calling them “pie-in-the-sky.”

“It never got that far,” Moore says. “At that point in the process, there are lots of names on a wishlist for many, many reasons. I’m sure his name was floated in some capacity, but it was never really on the table.”

Moore also explains that things got awkward on set when Patrick Stewart (Picard) wanted to bring his own writers in. “There was a point where Patrick wanted some rewrites of his scenes, and he pressed Rick (Berman, Producer) to bring on his own writer to do that,” Moore remembers. “Rick did it, and Brannon and I were not happy. I wasn’t particularly aggrieved about it, but then, that didn’t work out.”

He continues; “We were shooting in Arizona, where [Cochrane’s] missile complex was for his [warp ship] the Phoenix, and I went to set with Brannon to see Patrick in his trailer. And there was a sort of tension walking in because this is the first time we would have been in the same room together since this had all gone down,” says Moore.

Moore describes getting over this bump-in-the-road fairly quickly; “I remember Patrick at the outset just said something like: ‘It’s good to see you. I hope that we can all move on from the things that have happened, and now let’s just concentrate on the work.’ And I took that in the spirit it was given: [He] wants to move on from this, he’s not going to apologize outright, but he kind of is apologizing. And it was never spoken of again. So we just moved on.”

Moore is happy with the finished result, however; “The movie just works. I think audiences just really get involved with Picard’s storyline, and Patrick’s performance, and seeing this big-screen payoff to a chapter that started on the TV show.” 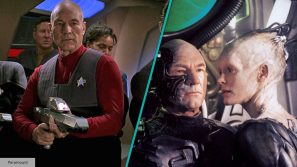