We have been given a glimpse of the first South Park movie that Trey Parker and Matt Stone have made for Paramount Plus – and in a shock move, it features a grown up Stan and Kyle. The movie, called SOUTH PARK: POST COVID, launches on Thanksgiving Day – November 25, 2021.

It is the first of 14 ‘movies’ (which are really more like TV specials) that the duo will be making for the streaming service, with the second premiering in December. Parker and Stone signed a $900 million deal with ViacomCBS (the company behind Paramount Plus) which runs until 2027 and does include a 30th season of the series, in addition to the ‘movies.’

Matt Stone told The Hollywood Reporter; “We’re trying to make what’s on Paramount Plus different from anywhere else, so hourlong made-for-TV movies is where our head is at. We’ll do two made-for-TV movies every year. They will be big, but they are not quite movie scale.”

The brief synopsis for SOUTH PARK: POST COVID reads: “We’ll find out the answer to the question: what happened to the children who lived through the pandemic? Stan, Kyle, Cartman and Kenny survived, but will never be the same post COVID.” So, it sounds as though Stan and Kyle won’t be the only grown up versions we’ll be seeing.

You can watch the 40 second teaser below;

Kyle has red hair and a matching red beard and he calls Stan, who has grey hair and stubble. It seems to imply that Stan has left South Park. Kyle says; “You remember when we were little? Us friends said we’d always be there for each other when things got bad.”

Fans have reacted by noting the similarity between adult Stan and Kyle with Stone and Parker. And others have said that Stan has been “done dirty,” while Kyle has had a “glow up.” Speculation about what grown up Cartman and Kenny will look like will now surely be rife. Will Kenny just have a bigger orange parka? We’ll have to tune in on Thanksgiving to find out. 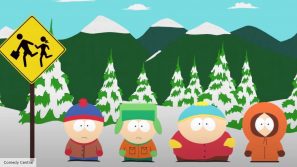