A remake of ’80s horror movie Slumber Party Massacre is in the works, and the first image has been revealed. Bloody Disgusting posted the still, giving us a look at the new line-up of teens whose night is about to be ruined.

Not a huge amount is given away by the picture, which just shows the cast in their pyjamas gathered by a window. One of them has a baseball bat, meaning this is probably the first act where they’ve spotted someone outside, and are getting ready to defend themselves from invasion.

Frances Sholto-Douglas, Hannah Gonera, Mila Rayne, Reze-Tiana Wessels, and Alex McGregor are the confirmed cast-members so far. The remake is being directed by Danishka Esterhazy, who handled 2019’s The Banana Splits Movie, a slightly more horrific version of the animal popband than we’d seen previously. It might not sound like it, but that Banana Splits film makes Esterhazy a very good candidate for a slasher revival like this, giving classic tropes and stereotypes some modern energy. Suzanne Keilly, who wrote 2018’s Leprechaun Returns, and has credits on Ash vs Evil Dead, provided the screenplay, and Shout! Studios is producing. 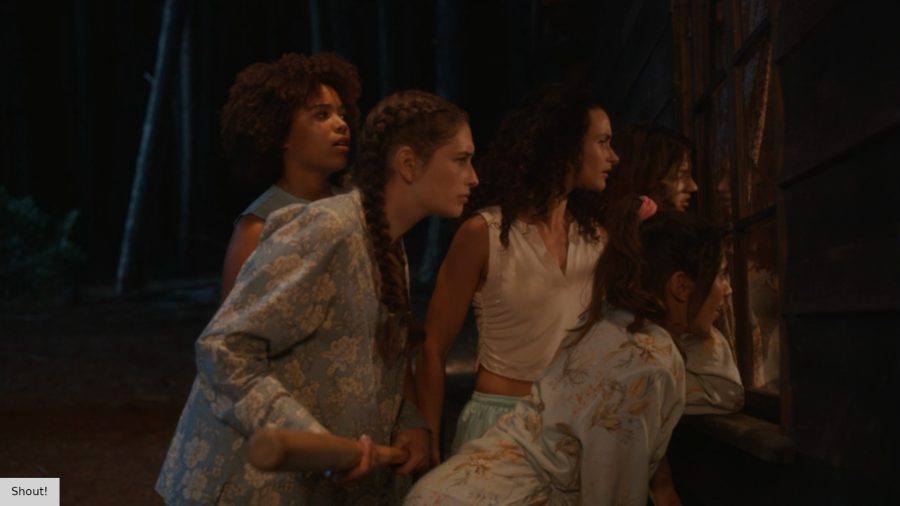 The original, 1982 Slumber Party Massacre was part of the slasher movement of the era, where it felt like almost every American horror filmmaker had a gang of high-school students being cut down by some killer or other. It was written and directed by Rita Mae Brown and Amy Holden Jones,  respectively, and the premise was that a psychotic serial killer had escaped and, surprise, they’ve shown up at a slumber party.

Famed genre producer Roger Corman produced it and its two sequels, though he doesn’t appear to have any involvement here. The official synopsis of the remake is: “A new contemporary twist-filled reimagining of the 1982 slasher cult classic just in time for Halloween. A slumber party turns into a bloodbath, as a psychotic serial killer wielding a power drill disrupts the fun.”

The Slumber Party Massacre will premiere on SyFy in the US, though no timeframe has been given just yet, and international distribution is being planned. Here’s the best horror movies on Netflix for plenty of scares in the meantime.