Wes Craven’s A Nightmare on Elm Street is no stranger to a remake, and now Elijah Wood wants to be the next filmmaker to throw his hat into the classic horror series. The Lord of the Rings actor recently discussed with the media his love of horror, and confirmed his desire to revive Freddy Krueger while promoting his upcoming film No Man of God.

In an interview with Comicbook.com, Wood’s latest feature, No Man of God – a crime drama premiering at the Tribeca film festival June 11 – wasn’t the only hot topic, as talks of reboots and spooky adaptations kept dominating the conversation. Wood confirmed his long-standing plans to remake the beloved ‘80s series saying, “We, personally, have talked a lot about, internally, Elm Street and how incredible it would be to play in that universe again and see that universe, to see Freddy and just that concept be explored again.”

The filmmaker further explained his plans in the horror genre, citing a potential adaptation of Stephen King’s short story Children of the Corn as well.

Both Elm Street, and Children of the Corn are horror behemoths, with tons of remakes, spin-offs, series and films behind their names; however, Wood seems confident in his ability to stand out in the sea of scary content.

Although Wood’s horror career is less known than his time in Middle Earth, the actor has a well of experience in the genre and would comfortably tackle rebooting a spooky flick. He has produced several SpectreVision titles, including Daniel isn’t Real, and the Nicholas cage led feature, Mandy. So his love for Nightmare on Elm Street isn’t surprising and, if anything, could lead to a solid remake which fans have been dying for since the last disappointing 2010 film.

Wood’s recently updated ComingSoon.net about the potential remake, and it looks like Freddy has to wait a bit longer before he returns to our nightmares. The current rights to our favourite razor fingered character are owned by New Line Cinema, causing a few complications in pitching for the next instalment for the series.

Falling asleep is overrated. Make sure to check out our list of the best horror movies of all time.

A Nightmare On Elm Street
Horror Thriller Movies
Read next 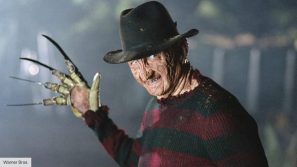