Rob Zombie’s highly-anticipated new Munsters film has been given a logo-reveal in a photo of a director’s chair, shared on Zombie’s Instagram. For the eagle-eyed among you, there are also some glimpses (in the monitors behind the director’s chair) into what looks to be the interior of 1313 Mockingbird Lane.

Zombie has shared lots of teases and tidbits about his passion project on his Instagram account, including a photo of the exterior of the main house set, casting announcements and more. Many of the images have been in black-and-white, leading to speculation that this new iteration of beloved TV show The Munsters would also be in black-and-white.

The Munsters premiered in 1964, the same year as The Addam’s Family. The Munsters were made up of Herman, who was based on Frankenstein’s monster, his wife Lily the vampire and their son Eddie – a werewolf. It only ran for two seasons but has reached cult classic status. It was a subversion of the American family sitcoms of the 50s and 60s that depicted suburban life as prim and perfect.

Rob Zombie’s Instagram post can be seen here, which shows a logo that looks as if it’s made of dripping green slime, surrounded by cobwebs;

The scene in the monitors appears to be in a dining room with wood panelling, paintings, chandeliers and stained glass windows.

Rob Zombie has had a life-long love of The Munsters – before he was a director, he was a musician whose most famous song was Dragula, which is a Munsters reference.

It’s exciting to see his passion-project coming together and to keep in touch with his regular updates on his Insta account. 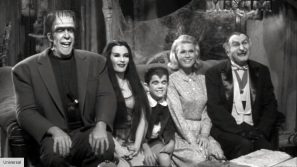