Chris Hemsworth’s pecs have finished filming on Thor: Love and Thunder. By which we mean, the upcoming Marvel sequel has completely wrapped on production.

Hemsworth shared the milestone on Instagram, along with a black and white picture of he, his massive triceps, and director Taika Waititi on set. Waititi is decked out in his motion-capture gear for his role as Korg, the alien made of rocks, in what’s his second time directing a Thor movie, after 2017’s Thor: Ragnarok. This is Hemsworth’s fourth headlining film in the MCU, and eighth appearance as the God of Thunder in the franchise besides.

“That’s a wrap on Thor: Love and Thunder, it’s also national don’t flex day so I thought this super relaxed photo was appropriate,” Hemsworth says in the caption, making sure we notice his biceps. “The film is gonna be batshit crazy off the wall funny and might also pull a heart string or two. Lots of love, lots of thunder! Thank you to all the cast and crew who made this another incredible Marvel journey. Buckle in, get ready and see ya in cinemas!”

Love and Thunder promises to be another raucous Asgardian affair, if for no other reason than Natalie Portman’s return to the MCU, to reprise her role as Jane Foster for the first time since Thor: The Dark World. The actor has hinted that she’ll be wielding the one and only Mjolnir in the movie, Thor’s trusty hammer that was destroyed by Hela during Ragnarok, referencing The Mighty Thor, a comics run where Jane Foster becomes the new God of Thunder.

Christian Bale joins the cast as villain Gorr, the God-Butcher, a powerful alien who wants to kill all godlike beings in the universe. Gorr was introduced in the comics by Jason Aaron and Esad Ribic, and his fight with Thor feeds into Jane holding Mjolnir during Aaron’s time on the book. Valkyrie (Tessa Thompson), Draw (Dave Bautista), Nebula (Karen Gillan), and Peter ‘Star-Lord’ Quill (Chris Pratt) are also set to appear.

This will be the sixth movie in Phase 4 of the MCU, with Black Widow, Shang-Chi and the Legend of the Ten Rings, Eternals, Spider-Man: No Way Home, and Doctor Strange in the Multiverse of Madness still to come beforehand. Thor: Love and Thunder is due to open in theatres May 6, 2022. Why not have a read of our MCU timeline to get a refresher? 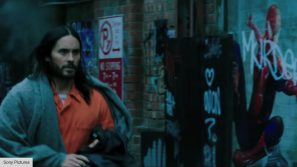