The Jackass boys have announced that their upcoming fourth comedy movie is called Jackass Forever. They announced the news on the official Jackass Twitter along with our first look at the film’s official logo. “We’re back! A bit older and a lot grayer, but definitely not the wiser,” the tweet reads. “Catch the #JackassForever trailer debut online Tuesday, July 20, follow our new Instagram account, and we’ll see y’all on Oct 22.”

Johnny Knoxville, Steve-O, Chris Pontius and the whole Jackass crew are set to return for the film with the notable exceptions of Ryan Dunn who unfortunately passed away in 2011 and Bam Margera. Margera was supposed to return for the movie however he was fired from the production earlier this year.

Margera took to Instagram following his dismissal and admitted to breaking his sobriety before asking fans to boycott the movie. Since then Magera has deleted the videos demanding fans not see the movie. It was later reported by TMZ that director Jeff Tremaine had taken a restraining order out against Margera over threats made over Instagram towards himself and Knoxville.

We’re back! A bit older and a lot grayer, but definitely not the wiser. Catch the #JackassForever trailer debut online Tuesday, July 20, follow our new Instagram account, and we’ll see y’all on Oct 22. https://t.co/i8TqOcnzyW pic.twitter.com/Fr6BcMOQ0w

In an interview with GQ, Knoxville refused to be drawn on the topic of Margera insisting he only wanted Bam to get better. “We want Bam to be happy and healthy and get the help he needs,” he said. “We tried to push that along. I think that’s all I really want to say about it. I don’t want to get into a public back-and-forth with Bam. I just want him to get better.”

Margera also spoke to GQ confirming that he had indeed been fired from the movie for breaking his contract. “It hurts my heart,” he said, “because I’ve waited 10 years for this.”

Jackass Forever is set to hit cinemas on October 22. 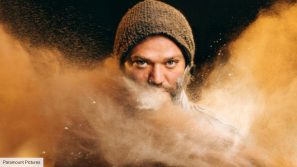