Dwayne Johnson has been celebrating 25 years since his first WWE match at Madison Square Garden, where he made his debut as Rocky Maivia (later to become The Rock), in an outfit that would not be out of place on Moana’s Maui.

ESPN, Boardroom, SI.com and WWE itself are all tweeting videos and articles to mark the occasion. Johnson said; “Shaking my head right now. What a wild, unpredictable road I’ve been on. So many people to thank along the way. Especially the fans. Love U guys. Humbled by this journey.”

Johnson joked several times about his haircut and his outfit; “How fire is my arts & crafts ring outfit from Michael’s!?! Hey, if you’re gonna debut in your first match EVER for WWE in the famed Madison Square Garden, you may as well DIY. What’s even more perplexing, is I actually looked in the mirror backstage and said, f*ck yeah”

Both Johnson’s father and grandfather were professional wrestlers – which is where his first wrestling name came from – his father’s name is Rocky and his grandfather’s name is Peter Maivia. He tried to make it in the NFL before moving into wrestling.

The Rock returned to wrestling part-time between 2011-2013 and continued to make sporadic appearances before formally retiring in 2019. Dwayne Johnson has gone on to become one of the highest-paid stars and biggest box office draws of the last decade in Hollywood.

You can see some of Dwayne Johnson’s tweets about the 25th anniversary below;

Wow 25yrs ago I wrestled my first match in @wwe in Madison Square Garden. Shaking my head right now. What a wild, unpredictable road I’ve been on. So many people to thank along the way. Especially the fans. Love U guys. Humbled by this journey. Wtf’s up with my awful haircut
🤣🤦🏽‍♂️ https://t.co/IdHu4SyyDn

And here he responds to a compilation video that the WWE have made of his career highlights;

Want to a moment to say THANK YOU to my @wwe family for this amazing look back on my wrestling career. I just watched this and the one thing that is so powerfully evident, is that in order for ANY success to happen, it ALWAYS takes SO MANY TALENTED PEOPLE to help. I’m moved 🖤🙏🏾 https://t.co/sGdVo7f9SR

Johnson is currently starring in Red Notice, an action-comedy with Ryan Reynolds and Gal Gadot, on Netflix. 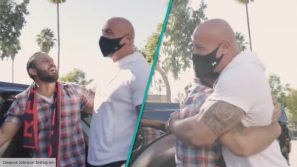 1How to watch Ghostbusters: Afterlife – can you stream the new Ghostbusters movie?
2How to watch Encanto – can you stream the new Disney movie?
3Venom 2 Easter Eggs – all the Marvel references in Let There Be Carnage
Latest in Movies
Spider-Man getting three more MCU movies after No Way Home, says Sony
Save 31% on an Amazon Echo Show 8 this Cyber Monday
Evil Dead won't have any "traditional form" any more, says Bruce Campbell
Best Cyber Monday headphone deals
The best Disney Plus movies
A