Timothée Chalamet, the star of Denis Villeneuve’s upcoming science fiction movie Dune, won’t be putting on a cape anytime soon. In a recent interview with Time, the young actor revealed that one of his “heroes” gave him some career advice, telling him to avoid drugs and superhero movies.

Chalamet is one of the biggest up and coming stars in Hollywood right now. Appearing in Wes Anderson’s The French Dispatch, Adam McKay’s Don’t Look Up, and currently filming Paul King’s new musical movie Wonka – the star has accumulated an impressive following over the years and has fully entrenched his name in the industry. When asked how he plans to stay level headed, and how he’ll continue to navigate the increased public attention, Chalamet recounted the advice he received from one of his idols in approaching his growing and increasingly popular career.

“One of my heroes—I can’t say who or he’d kick my ass—he put his arm around me the first night we met and gave me some advice,” Chalamet said. “No hard drugs, and no superhero movies.”

However, despite the advice given by the unnamed hero, Chalamet’s name has been tied to both the Marvel Cinematic Universe and the DCEU. It was rumoured that the star was among those considered for Matt Reeve’s upcoming action movie The Batman, and in 2018 the actor revealed to The Hollywood Reporter that he auditioned for Spider-Man: Homecoming. So who knows, we may see the star forgo the career advice and act in a superhero flick yet.

The next film the star is scheduled to appear in may not be part of a superhero franchise, but it is still a huge title with a well of lore and a massive fanbase. Chalamet is set to star in the latest adaption of Frank Herbert’s sci-fi epic Dune, as Paul Atreides. Dune is scheduled to open on October 21 in the UK and on October 22 in the US. The adventure movie will also be available via the streaming service HBO Max for US viewers on the same day as the flick’s theatrical release. 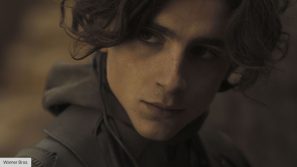