Watch out for any creepy children folks, because the ‘80s spooky cult classic, Children of the Corn, is officially getting a 4K Ultra Blu-Ray release. That’s right, horror fans, Arrow Videos is restoring the timeless horror movie, giving us a high-res version of the film as well as a series of extras included in the new collection.

Based on Stephen King’s short story of the same name, Children of the Corn, as tends to be the trend with most Stephen King adaptations, was initially met with mixed reviews. The film still only has a 35% rating on Rotten Tomatoes, but despite its critical backlash has gathered a huge following over the years. Telling the story of a cult of children out in a fictional town near Nebraska, the film is filled with human sacrifices, a few bloody pentagrams, and is now viewed as an iconic example of folk horror.

A 4K version of the film has long been missing from horror connoisseurs collections, and news of Arrow Videos upcoming release comes as a massive relief. 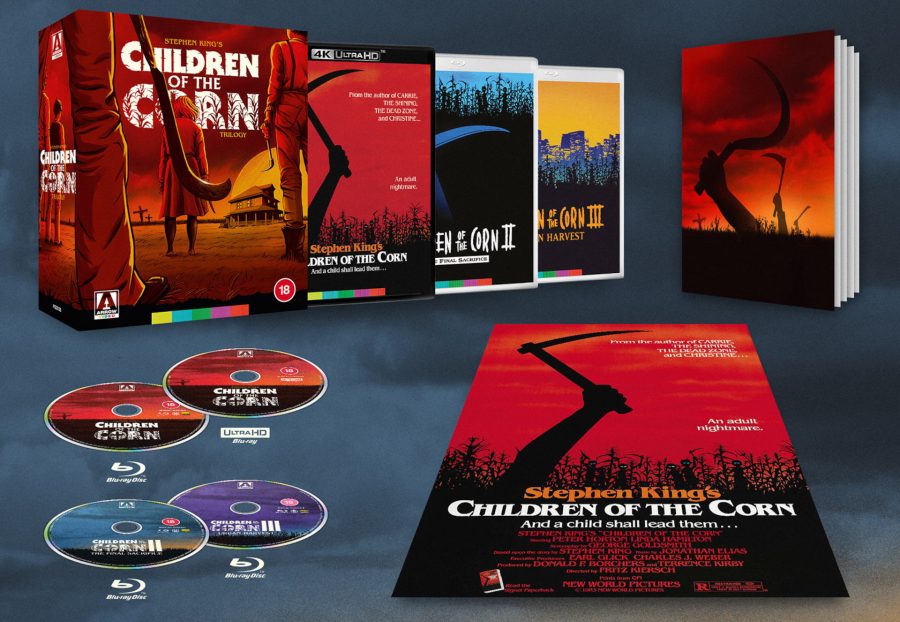 The Blu-Ray disc will overhaul the outdated picture quality of the original film, giving it a fresh new 4K makeover. Behind-the-scenes insights, various interviews, and an insider look into the making of the movie will be included on the disc. Disciples of the Crow (a short film adaptation of another King story) is also on the bonus features list, along with original commentary from the film’s director, Fritz Kiersch, and lead child actors, John Franklin and Courtney Gains.

The disc will be available to purchase this September, but there is some bad news for non-UK based fans. Arrow Videos will also be releasing the Children of the Corn trilogy as a Blu-Ray boxset. However, this complete collection is only available to UK horror fans at the moment.

This boxset option comes with the 1993 and 1996 sequels as a trilogy, and more features and bonus content. For now, US viewers will have to make do with just the first Children of the Corn film, but hopefully, the wait for the other movies won’t be too long. You can find out more, and preorder here.

Who said horrors have to end? Here is our list of the best zombie movies.