Welcome to Pandora, kiddos! Actor Jamie Lee Curtis has offered a sneak peek at the upcoming Borderlands movie, exciting fans with some behind the scenes snapshots on Twitter. We already know that the highly anticipated adaptation of Gearbox’s FPS, Borderlands, has a star-studded cast attached to its production, and now courtesy of the Halloween actress, we have an inside look into one of her co-star’s transformations.

Announced back in 2015, filming for the Borderlands movie officially started in Hungary in April 2021, and has been generating a ton of hype surrounding its cast and production. Based on the hit looter and shooter videogame series, the film appears to be gunning for the same level of acclaim, signing on Chernobyl writer Craig Mazin and a string of A-list celebrities to star. Curtis (Dr. Tannis) has been a nonstop source of information, keeping her followers up to date on her co-stars and spilling all the behind the scenes beans. Her latest post was a ‘secret’ shot of co-star Cate Blanchett (Lilith) in full costume, posing dramatically on a flight of stairs.

Despite the image not revealing much, the black and white silhouette is immediately recognisable as everyone’s favourite blasting, telekinetic siren Lilith. The pic shows the film is taking direct inspiration for its costume and character design from the videogame series, and will probably pay homage visually to the FPS in other aspects such as its cinematography.

Although fans may be disappointed that the plot will divert from the game’s main storyline (sorry Handsome Jack fans) the movie is on track to look fantastic and will no doubt bring the post-apocalyptic world to life.

Kevin Hart (Roland) and Jack Black (Claptrap) are also a few of the big names signed on to star alongside Blanchett, so we’ll be keeping an eye on Curtis’s Twitter account for any more teasers and character reveals. 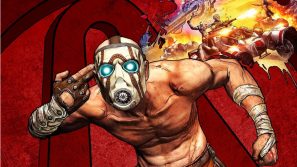 Borderlands movie release date, cast, plot, and more
Get involved Continue the conversation over on The Digital Fix Forum