Straight off the back of her performance in The Suicide Squad, Margot Robbie is already making plans for a new blockbuster performance. According to The Hollywood Reporter, Robbie is set to star in Wes Anderson’s new, and currently untitled movie that’ll begin shooting in Spain later this month.

That’s right; it looks like the DCEU actor will be trading in her Harley Quinn bat, as she gears up to join the acclaimed auteur’s new project. Plot details for the new Anderson film are being kept under wraps, and Robbie’s role is still unknown; however, The Hollywood Reporter suggests that the actor will be playing a supporting character instead of a lead. As the project will be filming outside Madrid in the small town Chinchón, many fans speculate that this desert-like location also points to the film being a western – but, just like Robbie’s role in the movie, this detail hasn’t been confirmed.

The actor will be joining Adrien Brody, Bill Murray, Tilda Swinton, and Tom Hanks, who are also cast in Anderson’s new mysterious project. Brody, Murray, and Swinton, can also be seen in another upcoming Wes Anderson film, The French Dispatch, which will hit theatres on October 22.

Margot Robbie is no stranger to working with big name directors, having starred in Quentin Tarantino’s Once Upon a Time in Hollywood, and Martin Scorsese’s the Wolf of Wall Street. Currently, the actor is filming Damien Chazelle’s historical flick Babylon, and is also set to star in the movie Barbie, which Greta Gerwig will direct.

While we wait for more updates regarding Wes Anderson’s secret projects, why not look over some other auteurs work? Here are our lists of the best thriller movies, and the best comedy movies of all time. 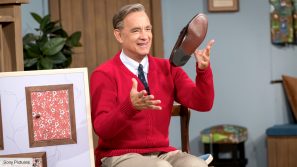