David Chase, the creator of The Sopranos, has revealed the less than holy nickname he was given during his time working on the show’s set. In a recent interview with Vanity Fair, Chase shared that star James Gandolfini used to call him Satan while filming the highly acclaimed mobster series.

Since premiering in 1999, The Sopranos has been widely praised as one of the best TV series of all time. Across its six-season run, it has won 21 Emmy Awards, and five Golden Globe nominations. Following the story of Italian- American gangster Tony Soprano (Gandolfini), the show tells the story of a man struggling to balance family time, and running a criminal organisation. The newest entry in the franchise will be the upcoming prequel film, The Many Saints of Newark, which will see Michael Gandolfini taking over the role of Tony from his late father.

While promoting The Many Saints of Newark, Chase recalled his time working on The Sopranos, and his rocky relationship with Gandolfini. He shared how Gandolfini used to bring his son Michael to set; however, despite the presence of a kid, that didn’t stop the actor from poking fun at Chase.

“Yeah, he was. … As a little kid. And his father used to greet me, ‘Hello, Satan,’ as we passed,” Chase said. It is no secret that Gandolfini had several issues with the creative crew while filming The Sopranos, as well as battling with personal struggles in regards to substance abuse, and self-directed rage. However, considering how Chase and Gandolfini reunited in 2012 for Chase’s directorial debut in Not Fade Away, it seems like there was no bad blood between the two, and that the Satan nickname was probably just a joke.

The Many Saints of Newark will open across UK cinemas on October 22, 2021. For more binge-worthy shows, be sure to check out our list of the best TV series on Netflix. 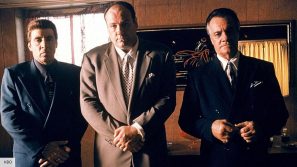