The second season of The Boys took on some heavy subject matter. White supremacy was a recurring theme in the storylines on the TV show, including villain Stormfront (Aya Cash), who has ties to Nazi Germany. Current events in the run-up played no small part in fueling the examination of these ideas.

“It was the daily headlines that inspired it. We drew from them pretty extensively,” Eric Kripke, showrunner on The Boys, told The Hollywood Reporter. “Those were the early days of the Trump administration. A really toxic xenophobia was just starting to spread. And then there was Charlottesville.” The incident Kripke is referencing was a gathering of right-wing groups and affiliates in Charlottesville, Virginia, in August 2017.

Neo-Nazi flags and symbols were openly brandished by attendees, who marched with torches and chanted white supremacist slogans. Violence broke out between attendees and counter-protesters, leading to several deaths. Heather Heyer, whose passing is commemorated at the end of Spike Lee’s BlacKkKlansman, was killed when a man attending the rally drove his car into counter-protesters, injuring another 35.

Watching this unfold while developing The Boys, a sci-fi series predicated on the fascist undertones of superhero franchising, gave Kripke pause. “I really walked into season two with the direction of ‘We’re going to tell a story about a modern-day white supremacist’,” he explains. “The books have a Stormfront, but it’s a man and he’s very German. It’s all pretty much what you see is what you get. But modern-day white supremacy is so insidious with social media and the way it draws people in.”

Major online platforms like YouTube and Twitter have come under fire for allowing right-wing views to propagate. In the adaptation of The Boys, Stormfront, whose namesake is a neo-Nazi forum from the early ’90s, is a young woman with a large social media following who regularly posts videos online. She’s careful not to speak too plainly about her racist ideology, acting like she doesn’t know better when challenged, all the while using her powers to commit hate crimes and spread pervasive, xenophobic messaging.

The Boys season 3 is due on streaming service Amazon Prime in the no too distant future. It’s doubtful Stormfront will turn up, but regulars such as Karl Urban’s Billy the Butcher, Jack Quaid’s Hughie, and Anthony Starr’s Homelander are confirmed. 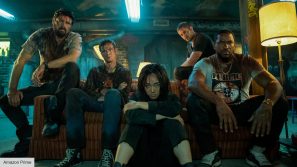 The Boys season 3 trailer, release date and everything else we know
Get involved Continue the conversation over on The Digital Fix Forum