The following review contains full spoilers for the finale of Preacher season two.

Everything that we’ve come to expect from Preacher was on display in The End of the Road. On the bright side, we had some the well-choreographed violence, bizarre characters, dark humor, and surprising turns of event that define the show’s peaks. At the same time, though, this finale is bogged down by its obligation to close out side plots that were typically only interesting in theory.

On one hand, you have Eugene and Hitler finally escaping Hell after a season of terribly-paced teasing. While the deadpan Ferryman was a humorous touch, the show has so clearly telegraphed Hitler’s endgame that, when he finally abandons Eugene and escapes into the real world, it comes as a surprise only to him. There’s definitely a way you can take the concept of “what if Hitler was resurrected” and make it intriguing, but based on almost all of his scenes this season, something tells me that Preacher won’t take full advantage of their interesting opportunities.

Cassidy’s decision to burn Denis was a very clever one that made a lot of sense for his character. The fact that he kills his own son, not because of the damage he’s causing to others, but because of the dark tendencies he brings out of Cassidy, is a particularly revealing bit of development. The fact that he’s willing to convert Tulip and fight Jesse further uncovers his evil ways. But still, both Denis and Cassidy were in limbo for far too many weeks, and this climactic action feels like it should’ve come a lot sooner.

Meanwhile, Jesse and Starr go on a big publicity tour, painting Jesse as an ass-kicking Messiah. This rise to stardom is slightly marred by Jesse’s discovery that the Voice no longer works. Even though it seems like that may have been Starr’s engineering – why does he have Jesse’s soul? – his obliviousness seems to signal the exact opposite. The fact that Jesse has now left the Grail to help Tulip, coupled with his inability to use Genesis and return to the L’Angells, gives him plenty to do once season three rolls around.

There’s also the minor development that Tulip is, you know, dead. Her demise evokes emotions, not so much of sadness (she is obviously coming back, people), but of minor annoyance. It continues Preacher‘s fascination with breaking apart its main trio as often as possible. Look, it’s totally acceptable to add some tension between these people–especially considering that they’re all kind of terrible–but to keep forcing it week in and week out is getting a bit trying. When Cassidy declares to Jesse, “I hate you,” it comes as inevitable in a very unnatural way. These characters had always seemed devoted to each other, even if the relationships were strained at times. But Preacher is intent on keeping these people disconnected.

Preacher really makes me want to love it, but at the same time, it gives me way too many things to complain about. For all the promise its narrative contains, it makes bad mistakes in its course of plotting and execution. Season two needed to have some fat trimmed off, and while its focus was clearly on the destination, there should’ve been some more intriguing stuff during the journey. And yet, while I will continue to gripe, I’ll also keep watching once new installments arrive. Because, God dammit, there’s a disgusting, brilliant monster lurking just beneath the surface, and when it does surface, it’s a sight to behold. 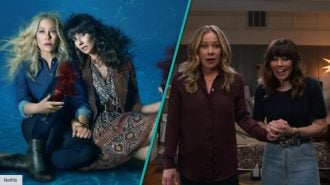 brand
Preacher: 2.13 The End of the Road | The Digital Fix