Plots thicken and suspicions are confirmed in this week Liar. Jess Thomas takes a look…

Episode three of ITV’s Liar was somewhat refreshing after the torturous slog that was episode two.

It started with Laura having the same terrifying realisation that the audience had at the end  of episode two; she left her earring at Andrew’s house. This lead to her returning to her apartment in a futile attempt to find it there. Being in the apartment triggers another flashback. This time it is the sight of a stuffed rabbit that Laura won in a fayre game and kept to annoy her ex-boyfriend. At first this flashback seems to only serve as another reminder of just how ‘lovely’ the date was before Andrew raped Laura, but it is actually another case of foreshadowing, the resolution of which I will come to later.

Foreshadowing is a device used frequently in Liar, especially in the flashback portions. The uses are, once resolved, incredibly obvious, not that I mind. So much of the rest of the story is still a mystery that it is satisfying when one of the loose ends is tied. The flashback triggered by Laura seeing the rabbit also continues a trend and reinforces the idea that the flashbacks are from Laura’s perspective.

Shortly after this we meet Dennis, the mysterious man who called Andrew last week, saying that Laura had done this before. He arrives at Andrew’s house and tells his slimy sob story of how Laura was a teacher at the Bristol school where he served as head teacher and howshe accused him of sexual harassment. In this scene he heavily implies that he was cleared by the board and it is obvious that Laura is lying now just as she was then.

Except later on it is revealed that Dennis did not in fact get cleared, but rather Laura dropped the charge because of the stress it was causing her. The second Dennis said this on screen I knew my uncomfortable feeling about him was correct and that he was lying, or rather he genuinely believed that he wasn’t in the wrong even though he was. As he is leaving the station there is a confrontation with the police where it is heavily implied to Laura’s assaulters – Andrew and Dennis –  that the case is just based on Laura’s word, and that alone shouldn’t ruin their lives. This argument makes my stomach turn and firmly places both of them in the position of being awful people. Because yeah it is just Laura’s word, but the same could be said for their defence. So why is their word any more important, or more objective, than Laura’s?

Dennis’s story line ends at the pub over a pint, which seems the perfect setting for a skin-crawling conversation oozing with male entitlement. After a gas-lighting filled telephone call with Laura, Dennis lets slip to Andrew that his name was cleared by Laura dropping the case and then proceeds to tell him the story behind Laura’s accusation. In doing so Dennis reveals that he did, in fact, sexually harass Laura, but also that he genuinely doesn’t think that he did. This revelation didn’t come as a surprise and, at this point, neither does Andrew’s expression of dread.

Meanwhile Laura is dealing with a situation with one of her students, Makida, who has taken some pills she ordered online in order to induce an abortion. Whilst this is distressing enough, the reveal of who her boyfriend is makes it worse; its Luke, Andrew’s son. As Laura tries to convince Makida to tell her father about what has happened Makida is reluctant and explains to Laura that her father sent her sister back to Ethiopia just for dating; her sister gets beaten there but her father doesn’t believe it.

This adds another layer to the already concurrent theme of men not listening to women when they try to seek help for their abuse. So far all these instances have been frustrating representations of something that does happen far to frequently in really life. And it feels like episode three marks a shift from, ‘did he didn’t he?’ to ‘look at the nonsense abused and vulnerable women have to put up with’.

Speaking of nonsense, the case is also dropped in this episode, due in part to Dennis’ testimonial. When the police tell Laura she is understandably distraught. However, when DI Harman goes to tell Andrew that he is a free man something entirely unexpected happens; he asks her out for a drink. This just reinforces how arrogant and entitled he feels around women. DI Harman rejects him by telling him she “doesn’t go out for drinks with men who rape women” and walking away. The look on Andrew’s face as she leaves is chilling.

The case being dropped would feel like the end, except for the fact that Liar is only half way through its run. In the final minutes of the episode DI Harman visits Laura at school to inform her of the Edinburgh police’s suspicion that Andrew’s wife’s death may not have been a suicide. She also warns Laura to run, that Andrew Earlham is a dangerous man. A sentiment that gets proven in the last flashback of the episode, though not from Laura’s perspective; Andrew pouring something into her drink, proving that he did in fact rape her.

The final terrifying scene inter-cuts between Laura arriving home to see that her stuffed bunny has been moved and her lost earring has been forced through its ear. All the while, Andrew sits at a desk filling a defamation of character law suit against Laura. So much for his previous mantra of ‘I just want this to be over’.

These last few scenes took a route I wasn’t expecting to happen, but am incredibly glad that they did. Laura is telling the truth and this isn’t going to be some parable about how false accusations ruin lives. Liar could still drop the ball, but this new focus on male entitlement and how difficult it is for survivors to be heard and taken seriously, even when the officers on their case know that they are telling the truth, has piqued my interest again. Where the end of episode two left me dreading having to watch episode three, I am now excited to watch episode four. 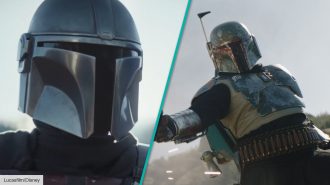 1The Book of Boba Fett episode 5 review – shall we just do The Mandalorian season 3 instead?
2Dead to Me season 3 release date, trailer, and cast – everything we know
3How to watch The Book of Boba Fett episode 5 – when can you stream the new Star Wars TV series?
Latest in TV
Fight Club writer responds to China's alternate ending
Nicolas Cage's best friends are a cat called Merlin and a crow who swears at him
Stephen King's Later becoming Blumhouse TV series starring Lucy Liu
Mortal Kombat 2 in the works with Moon Knight writer
Steve Carell joins Ryan Reynolds and John Krasinski's new movie
A