The new Star Wars TV series, The Book of Boba Fett, has a release date. Boba Fett will be taking over streaming service Disney Plus on December 29, when the first episode will premiere.

Teased at the end of The Mandalorian season 2, The Book of Boba Fett finally gives the galaxy’s favourite bounty hunter his moment in the spotlight. After taking over Jabba the Hutt’s palace, and killing Bib Fortuna for good measure, Boba (Temuera Morrison) and his accomplice Fennec (Ming-Na Wen) are set to tear through the underworld of Tatooine, and the known universe, to get redemption for every wrong committed against them.

An official synopsis released by Lucasfilm and Disney Plus reads: “The Book of Boba Fett, a thrilling Star Wars adventure, finds legendary bounty hunter Boba Fett and mercenary Fennec Shand navigating the galaxy’s underworld when they return to the sands of Tatooine to stake their claim on the territory once ruled by Jabba the Hutt and his crime syndicate.” Starting December 29, the sci-fi series will then run weekly for the entirety of the season.

The Book of Boba Fett is produced by John Bartnicki and John Hampian, and co-executive produced by Karen Gilchrist and Carrie Beck. Jon Favreau, Dave Filoni, Robert Rodriguez, Kathleen Kennedy, and Colin Wilson are all serving as executive producers.

His story is only beginning. The Book of @BobaFett, an all-new Original Series, starts streaming December 29 on @DisneyPlus. #TheBookOfBobaFett pic.twitter.com/bWPg0D0Z6l

A large number of Star Wars productions are in development at the moment. There’s Star Wars: The Bad Batch season 2, an Ahsoka Tano solo series, and on the big screen, Patty Jenkins is working on Star Wars: Rogue Squadron.

That’s without mentioning The Mandalorian season 3, which is expected next year, and anime series Star Wars: Visions. Lots coming from a long, long time ago, in a galaxy far, far away. 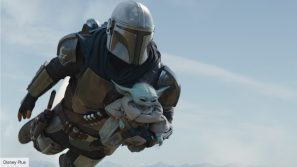