Turns out, this year’s Spiral could’ve been a lot gorier. During a watch party online, director Darren Lynn Bousman says he and the Motion Picture Association of America disagreed about one particular scene in the horror movie.

Early in Spiral, there’s a bit that involves a human body being skinned. Yes, it’s gruesome, but not as gruesome as you might imagine. Bousman wanted it to go on longer, and, unfortunately, lost a battle with the MPAA to preserve it. “The skinning scene was originally much much longer,” he tweeted. “The MPAA did not want anything to remain that showed actual peeling. We went to war over this sequence. Only a few shots remain sadly.”

Horror films have long struggled with ratings boards and the like to find compromises on their visual imagery. In the ’80s there was the video nasties, where many movies were banned, and some cult classics, like 1971’s the Devils, remain unavailable in their original form. Sometimes these measures become yet more frustrating because of inconsistent enforcement. In Bousman’s replies, many recommend Hunter Hunter, a 2020 thriller movie with an extended skinning scene.

The skinning scene was originally much much longer. The MPAA did not want anything to remain that showed actual peeling. We went to war over this sequence. Only a few shots remain sadly. #SpiralWatchParty pic.twitter.com/jox914EkYz

Whatever the case, it’s a pity we may never see what Spiral: From the Book of Saw could’ve looked like. The film essentially re-kickstarts the Saw franchise by introducing a copycat killer to Jigsaw. Josh Stolberg and Peter Goldfinger wrote it, with Chris Rock in a starring role, as well as executive producing.

Another new Saw, and a Saw TV series spin-off, were reported to be in development in April. Plenty of opportunity for whatever the filmmakers think up. Here’s the best horror movies on Netflix for more heinous traps and killings. 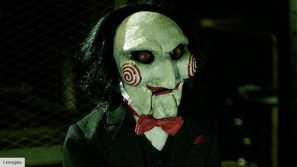