If it’s not one thing for Nicolas Cage, it’s another. Someone stole his pig in Pig, and now he’s facing ghosts and ninjas in action movie Prisoners of the Ghostland. The man can’t catch a break.

In the thriller movie, Cage plays an imprisoned bank robber whose bail is posted by Bill Mosely’s The Warlord, in order to find his missing granddaughter Bernice, played by Sofia Boutella. Samurai, ninjas, and ghosts stand in Cage’s way, and to makes matters worse, The Warlord has strapped on an explosive jacket to Cage’s character that gives five days to find Bernice, or kaboom.

Sian Sono is directing, in his English-language debut, and he spoke to Entertainment Weekly about where this outlandish feature might land in Cage’s eclectic oeuvre. “I know that Nicolas Cage has done a lot of great works and some of the works are crazy as well,” he says. “If audiences think that this is the wildest movie that he’s ever made, the craziest movie that he’s ever made, then I would be really really happy to hear that.”

The official synopsis reads: “when a notorious criminal, Hero (Cage), is sent to rescue an abducted girl who has disappeared into a dark supernatural universe, they must break the evil curse that binds them and escape the mysterious revenants that rule the Ghostland.”

Prisoners of the Ghostland is the third Cage film this year, after Willy’s Wonderland, where he beats up animatronic robots, and Pig, where he does no beating up at all. Maybe after this he’ll do a quiet drama to keep consistency.

The movie premiered at the Sundance Film Festival back in January, but is finally getting a release next month, on September 17. We’re keeping our eyes peeled for a trailer. In the meantime, here’s the best horror movies. 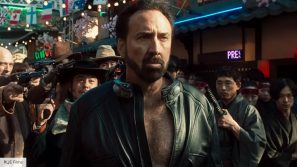