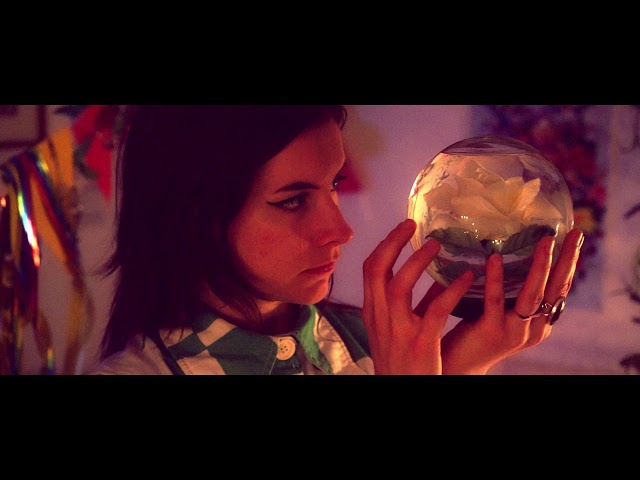 Much like the track itself, the new video for ‘Whale’ uses minimal and intimate images to conjure up a bold and blissful tone that channels the frontwoman’s own DIY aesthetic. Filmed in her hometown of Bredäng, she treats us to a fresh and personal snapshot of her current surroundings, giving context to her warm and inviting direction.

Speaking about the new video, she said, “The music video for Whale is filmed in Bredäng where I live and am currently spending almost all my time. It was very much a “go with all your instincts” kind of process. We strung up some gold sheets by a little bit of forest just outside my flat and the bedroom scene is from this collective I used to live in where all the walls are covered in posters, plastic flowers and pink dresses. The song has a pretty lonely feel to it, a melancholic sense of isolation with a growing restlessness. It’s like I’m trying to shake off the feeling of impending doom that’s following me around. That’s where the ghost comes in. I’ve got my birthday cake, balloons, sparklers and candles but the ghost is still hanging around.”

A subversive indie-rock song, ‘Whale’ demonstrates Rebecka’s ability as a songwriter to make the world stop with her music. Comprised of distorted guitars and loose drums, ‘Whale’ feels both recognisable and entirely new. Paired with the delicate and dreamy production is Rebecka’s distinct and punchy vocal, as well as her killer melodies, that unfurl towards the chorus. Lyrically the song which is both personal and prescient, speaks to our fractured socio-political climate and our current isolated situation.

‘Whale’ is the first track to be taken from Rebecka’s upcoming EP of the same name, due for release later this summer. Recorded between London and the Swedish countryside, the record comes after a period of musical and personal discovery. Having left her native Stockholm, Rebecka found herself living in Paris, before relocating to London in 2014. It was there that her musical trajectory solidified, and in the summer of 2018, she started recording with producer Anders Källmark.

Keep up with Rebecka on her socials for more music, touring updates, and additional exciting news to be announced.