It may be a new concept for many of us, but The Flaming Lips’ frontman Wayne Coyne has been showing up to gigs in a bubble for years. As part of the band’s psychedelic live show, which sees unicorns smear across the surface of giant robots, he emerges from the stage in the safe repose of a plastic ball and rolls into the crowd. 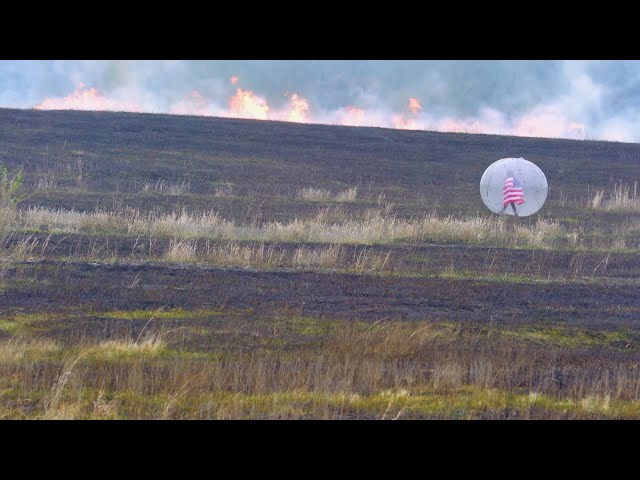 In the video for ‘Flowers of Neptune 6’,  the lead single from American Head, we see Coyne roll around in his bubble abandoned field. It’s an image that sums up what we may all be feeling right now, with the interaction between music, fans and humanity at a distance.

And while it may seem depressing at first, from this soft interior he delivers a ballad that recalls the spirit of The Soft Bulletin and Yoshimi Battles the Pink Robots, two of the band’s most critically acclaimed albums from the turn of the century.

Contrasting images of childlike fantasy with stories of misspent youth, the song channels a renewed sense of optimism and retrospect that’s instantly moving. Its bittersweet melodies are a reminder of the potent spirit of those past albums, with their trademark sound feeling as fresh and expansive as ever.

It’s a great indication of things to come. The sheer number of singles drip fed in the run up to the album’s release promised this to be their most accessible album since At War with the Mystics. And that’s totally right. At the album’s peak, tracks like ‘Dinosaurs On the Mountain’, ‘At the Movies On Quaaludes’  and ‘Mother I’ve taken LSD’ enter into a comatose head space that feels both panoramic and deeply personal, crossing the frontiers of human experience into huge instrumental breaks.

Even when tackling themes of mortality in ‘Brother Eye’, the vocals are delivered with a compassion that breaks through waves of disparate electronics and auto-tune.

It may claim its roots in a kind of cosmic Americana – a mindset inspired by stories of Tom Petty and the Heartbreakers – and you can hear this in the space-western vibes of ‘Assassins of Youth’. But like the harmonious landscapes of The Soft Bulletin, American Head is far more universal space to dive into. This is best represented by album closer ‘My Religion Is You”, a definitive statement that deserves to be immortalised alongside the best tracks in their discography like ‘Do You Realize??’

After the brutal energy of 2009’s masterpiece Embryonic, most of what followed saw Coyne and co. wandering through the abstract desolation of albums like The Terror, amongst oppressive textures and experiments, into unlikely collaborations with the likes of Miley Cyrus. It’d be easy to call their latest album a return to form because it recalls a period that we remember fondly, but the truth is that all of those albums were great in their own way. What it does represent is the rediscovery of a spirit that’s much needed right now.

To put it short, American Head couldn’t have come at a better time. Its stories are sometimes heavy, but zoning out in the comfort of your own bubble, you could genuinely believe that The Flaming Lips have the power to change the world.