Queen of folk music, Jess Williamson, has announced the May 15th release of her new album, Sorceress. She has also shared the video for her latest track ‘Wind On Tin’ – check it out above. 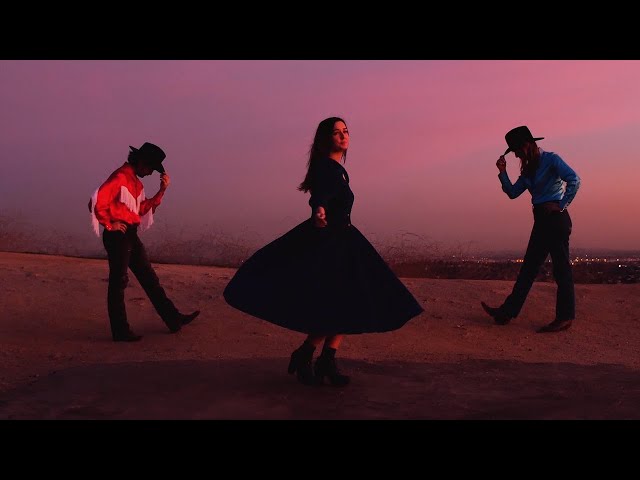 In the song, the narrator travels to a remote desert town to attend the memorial service for a friend who passed away. She thinks she hears the voice of God, and she’s either tuned in, crazy, or both. The accompanying video, directed by Jess Williamson and Eli Welbourne, features her dancing in iconic locations around Los Angeles, all awash in a dreamy filter.

“Grief has a way of making the veil between worlds very thin,” says Williamson. “Prior to the memorial service, I was sitting on a porch passing around a guitar and drinking beers with a few very dear people in my life who I look up to greatly and who were very close to the person who had passed. We heard an unexplainable sound in the wind that made us all pause. Like a flute, but more angelic. It kept going. We tried, unsuccessfully, to record it. The sound was indescribably beautiful and heavenly. ‘Were the angels singing just for us, or is that what the wind out here does on tin?’ Regardless of the answer, I know that for that brief moment we were lucky initiates into the mystery realm, and I’m deeply grateful.”

Sorceress is polished and assured and it hits immediately – like a modern classic should. Across eleven country western prayers and pop incantations, Williamson melds the magical with the day-to-day, and makes it feel universal. We are living in the midst of an occult revival, a response to these chaotic times.  Fittingly, Sorceress addresses this cultural moment today’s chaotic times via personal epiphany and offers revelation in the real sense of the word: you listen to it, learn from it, and leave changed. The Texas singer and songwriter makes deeply felt songs that orbit around her powerful voice, a voice that’s strong and vulnerable, big-room flawless, quietly ecstatic, and next-to-you intimate.

Offering a deep-hued kaleidoscope of dusty ‘70s cinema, ‘90s country music, and breezy West Coast psychedelia, Sorceress weaves a woman’s wild love letters to a confusing present and uncertain future—with reflections on femininity and the pursuit of perfection, New Age beliefs and practices, critiques of capitalism and social media, southern and western landscapes , and intimate details of the lives and deaths of loved ones and friends. It’s a record about loss of innocence and acquired wisdom that’s self-critical, self-assured, and soul-searching.

Sorceress was written in Los Angeles, recorded at Gary’s Electric in Brooklyn, and then finished at Dandy Sounds, a home studio on a ranch in Dripping Springs, Texas, where she recorded all of 2018’s Cosmic Wink. While she’s stayed true to her deep country roots, the music has grown in its ambitions. The shift happened incrementally, though without skipping a step, so like the rest of what Williamson does, it feels perfectly natural and true. Because of that honesty, even though the complex, multi-layered music on Sorceress is so different from where she started, you can still feel everything she’s done previously breathing contentedly in its shadows.

brand
Jess Williamson is set to release her new album, Sorceress this May. Watch the video for new track, ‘Wind On Tin’ | The Digital Fix