Rob Zombie, distinguished horror movie director and heavy metal musician, has shared another update on his film of The Munsters. The creepy family’s mansion is starting to come together, according to a post on Zombie’s Instagram.

“Mockingbird Lane now has a paved street! Things are moving and grooving,” Zombie captioned the images, that just show some scaffolding and a makeshift road. In The Munsters, the monstrous family live at 1313 Mockingbird Lane, in Mockingbird Heights, a made up American city. Zombie is currently putting the comedy movie together in Budapest, leaving him to construct his own makeshift US suburb for the Universal Monsters family to reside.

Earlier posts from Zombie showed blueprints of the homestead, as spacious as it is on the classic sitcom. Other posts had some costumes for Herman and Lily Munster, the patriarch and matriarch of the family, and some preliminary effects work on Herman’s large, scarred Frankenstein’s monster head. No word on casting or any other personnel just yet, but we’re keeping our eyes peeled to Zombie’s social media.

The Munsters transposes iconic creatures from Universal’s monster movies – Dracula, Frankenstein’s monster, Wolfman, and so on – into a lovable gothic family, somewhat similar to The Addams Family. The original show debuted on ABC back in 1964, and there’s been several reboots, to varying degrees of success, since.

Zombie is writing and directing his take, but no release window is known as of yet. Away from cinema, his latest album, The Lunar Injection Kool Aid Eclipse Conspiracy, came out earlier this year. You can listen to the single ‘Crow Killer Blues’ here, and here’s the best horror movies on Netflix for some more scares. 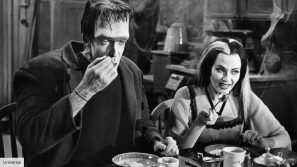