Much as I love it, the Marvel Cinematic Universe is something of an unruly mess. Between the films and Disney Plus miniseries, it’s kind of exhausting, and good luck if you’ve somehow fallen behind. If you want some Marvel action without the investment, or just something that isn’t so self-serious, MODOK is one of the best adaptations from the comics publisher to date.

Based on the titular character, a villain with an oversized head who perpetually floats in a hoverchair, the series is an acerbic, claymation TV series about MODOK’s (Patton Oswalt) attempts to rebuild his life after hitting rock bottom. He’s usurped as the head of Advanced Idea Mechanics, his evil lab that’s teetering on bankruptcy, and his wife, Jodie (Aimee Garcia), wants a divorce.

Stuck in a dilapidated apartment, MODOK has to learn how to be a father, a friend, and a good teammate, in order to get another chance to be a decent husband. All the while, he’s being hunted by a past version of himself, and the Avengers are still ready to embarrass him at any opportunity. However hard it is to be a hero, sometimes bad guys catch even less breaks.

Something that sets MODOK apart immediately is understandable stakes that don’t require a mountain of context. Away from Captain America’s friend that disappeared during World War II, or Hulk showing up on a random planet, or Loki variants, MODOK just wants to be a better person. He’s had a hard reality check that previous behaviour was making others miserable, and he’s trying to redeem himself.

It’s simple, and the conflict is basic. He doesn’t understand his teenage daughter, Melissa (Melissa Fumero), who’s also an oversized head floating around, or his younger, multi-talented son, Lou (Ben Schwartz), because he’s never really tried to. And his partner, Jodie, is tired of his aspirations for megalomania.

In the third episode, ‘Beware What from Portal Comes!’, MODOK takes his daughter to a work conference for some quality time. She advises him on exploiting the weaknesses of those around him to win their approval, but he tries to take a shortcut by summoning aliens, upsetting her. In the end, he realises all he has to do is acknowledge her without letting his ego take over. 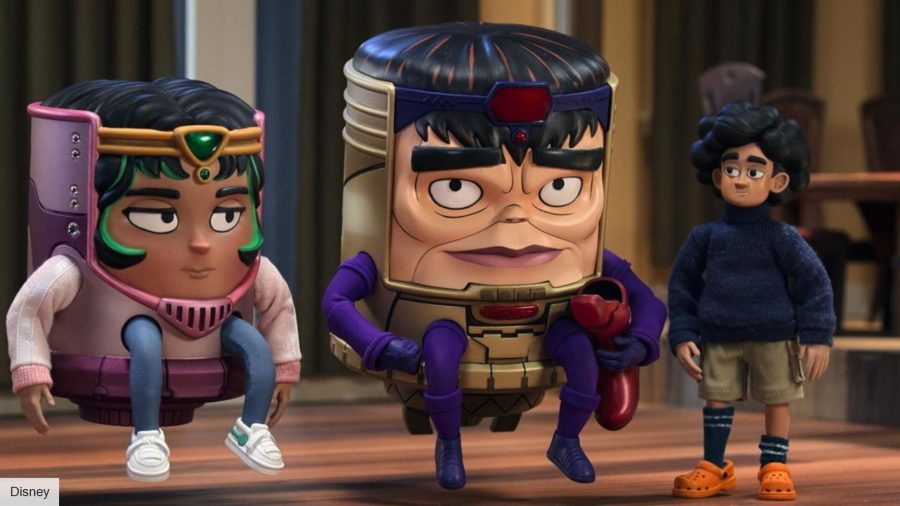 MODOK’s struggle is with insecurity, an overwhelmingly human trait that so often feels devastatingly singular. We’re all crawling with anxieties, trying desperately to hide our vulnerabilities and play it cool. Often, this manifests in drastic overcompensations that come across arrogant, or crass, or just plain hurtful.

When his son Lou finally gets an audience for his magic tricks in Asgard, MODOK panics and starts a war between Asgardians and goblins. The idea of Lou getting a bad reaction from a crowd terrifies his father such that MODOK pre-emptively defends him. No great spectacle or world-altering stakes, just a dad who’s doting the wrong way a little too hard.

Between the familial hurdles are ongoing attempts to remove Austin Van Der Sleet (Beck Bennett) from AIM after he managed to get a majority stake. A young, hip techbro multi-millionaire, Austin seems just about everything MODOK isn’t. Through the season, we learn Austin’s all about pleasing corporate overlords, whereas MODOK really cares about the people around, he’d just allowed those feelings be overwritten by his obsession with villainy. 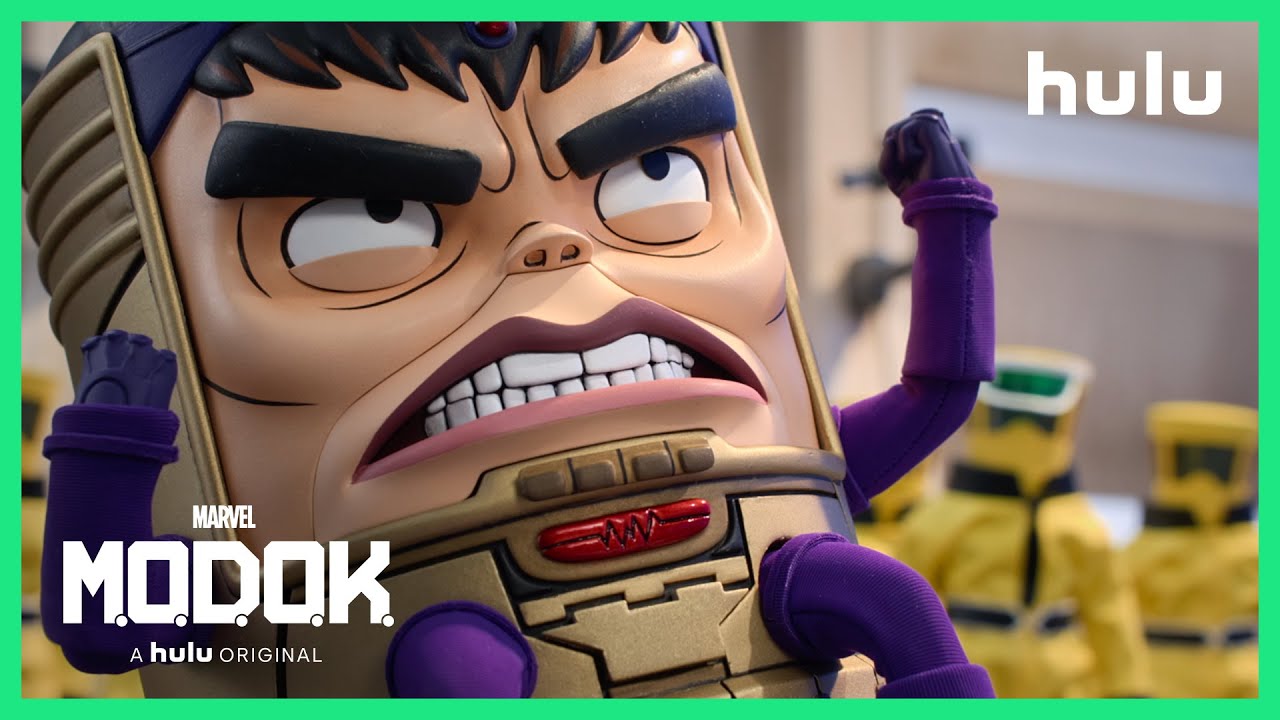 Part of a planned wave of shows on Hulu, MODOK was the only survivor when Marvel Television was folded into Marvel Studios. The dynamic between Austin and our would-be supervillain reflects the MCU’s inhospitality, corporate and otherwise, to anything outside its house-style. MODOK is about understanding one’s individuality in the face of internalised shame and foreboding social hierarchy.

Stoopid Buddy Stoodios co-produced the series, handling all the stop-motion animation. The purveyor of variety sci-fi series Robot Chicken, Stoopid Buddy brings the same meticulous unpredictability to MODOK’s crass humour and absurdities. People are mangled, sets are destroyed, chunks of food, blood, torn limbs, vomit have a gooey texture. Big scenes are as vivid as any comic book panel, only ickier with the insurance of clay to have just anything happen.

A stand-out battle occurs in episode five, ‘If Beauracracy Be… Thy Death!’, between MODOK and Monica, an AIM confidant and higher-up. Using every piece of lethal technology at their disposal, they become different animals, have a Pokémon battle, become 2D pixel fighters, transitioning seamlessly from one animation style to the next. It’s a technical wonder that illustrates just how capable both of them are, and fully embracing the notion this is comic books, where anything can happen. 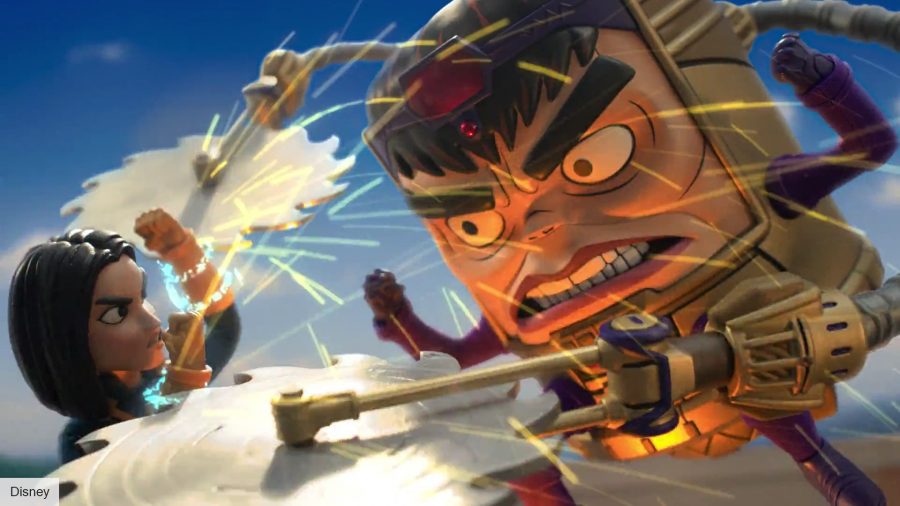 Growing up in ’90s, I have as much appreciation for the Spider-Man and X-Men cartoons of that era as the next person. The voices of Cal Dodd’s Wolverine and Christopher Daniel Barnes’s Peter Parker are so synonymous with the characters, I tend to hear them when I read comics. But as good as they are, times have changed. I’m not eight-years-old, and Marvel’s now taken over the world.

I don’t necessarily want every superhero thing to be about righteous heroes, nor do I need every season to last dozens of episodes. Spider-Man, X-Men, and just about any other previous Marvel animation feels like an omnibus of the books now, for good and ill. Entertaining and engrossing, sure, but also daunting and time-consuming.

MODOK’s one season is nine episodes, tracking a single redemption arc from start-to-finish, all now conveniently available on streaming service Disney Plus. You can jump right in without knowing anything about Marvel. Heck, you should try it especially if you dislike Marvel, because the contempt gives you something in common with our down-and-out antihero. 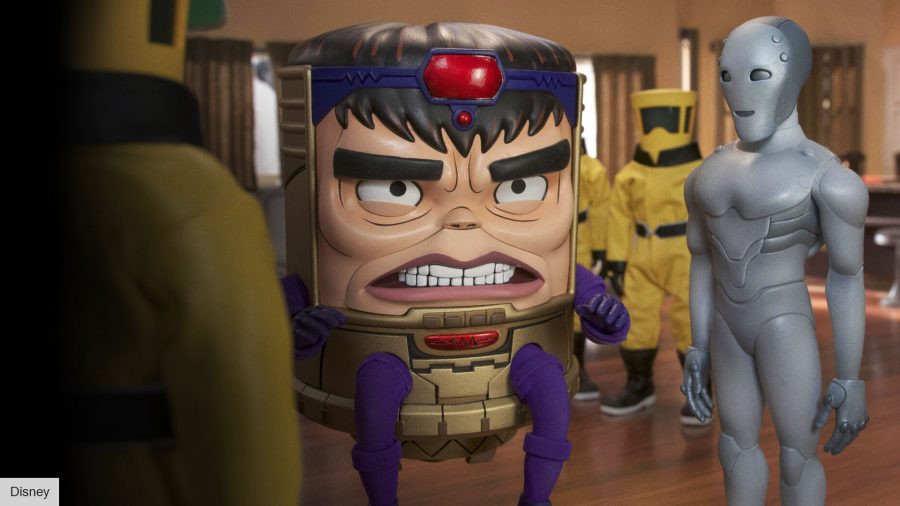 Early in the season, an ill-conceived jaunt back in time brings a young MODOK to the present. The idea was for MODOK and Jodie to re-ignite their marriage by reliving a botched date, but instead, he ends up having to literally outdo his past. During a later episode, he tries to corral other Z-tier bad guys to steal Captain America’s shield. They fail, of course, but the bonding exercise teaches MODOK that believing anyone’s below you is bogus.

In the end, the ragtag group – emphasis on rag and tag – watch a sunrise on a beach together. One of them, Melter, quietly passes away. Of everything, that’s what lingered with me the most, a moment of calm in the constant race against your own negative tendencies. MODOK may not be getting an invite to the Avengers Initiative any time soon, but the way he faces himself makes him a greater hero than most of them, and his series stands right alongside any of their best days.