It looks like M. Night Shyamalan, the director behind the acclaimed ghost movie, The Sixth Sense, is keeping busy this year, and has a new secret flick in the works. Despite his latest thriller movie, Old, only being released a few months ago, the filmmaker has shared via social media that he’s already busy with a fresh movie, and has completed the third draft for his next script.

Shyamalan’s stories are divisive, to say the least. His career has gone through a roller coaster of highs with seminal films like Unbreakable, and a few hard lows with movies like The Last Airbender. It’s a known fact that when it comes to his directorial and narrative vision, sometimes he makes a hit and other times he misses the mark. While a box office success, his most recent feature Old holds 50% on Rotten Tomatoes, and many have been wondering which way Shyamalan will swing next. Will his new movie be a success or a cinematic flop? Well, it looks like we won’t have to wait long to find out.

The director posted a snap of a leather-bound script on his Twitter page yesterday, with the accompanying caption: “The next one. On third draft. Super tight. Under a 100 pages”. No plot information has been shared so far, but the news came as a welcome surprise for the director’s followers.

Although we don’t know much about the secret movie, the 100-page length does indicate that it will be under two hours – unlike Old, which had a 118-minute runtime. The short length could point towards some clean and focused storytelling from Shyamalan, and we are excited to see what the filmmaker has in store. Stay tuned for updates.

In the meantime, if you are a fan of otherworldly or horrifying twists, here are our lists of the best alien movies and best horror movies of all time. 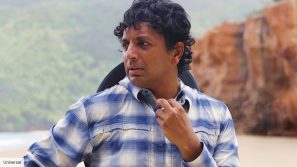 M. Night Shyamalan’s new movie titled Knock at the Cabin set for 2023 release
Get involved Continue the conversation over on The Digital Fix Forum