We all remember Sam Neill from Jurassic Park, right? Dr Alan Grant, esteemed paleontologist and dino-expert? He got a bit snubbed on some LEGO based on the science fiction movies, and he's none too please.

On the boxart for the set in question, we have pics of many of the cast, and their corresponding figures. Laura Dern is there, the late Richard Attenborough, Jeff Goldblum, but not Neill. In his place –  well, let his tweet explain. “OUTRAGE! So signing this ⁦LEGO box for charity today. And I see beside each model a shot of the actor,” his says. “Cool. Jeff [Goldblum]! Laura [Dern]! But instead, beside Alan Grant's figure there’s a – what!? No it IS! A TOILET! Insulting? Hilarious? Explain! Amends!”

There's being replaced, then there's being replaced by a toilet. The shame. The horror. What a calamity. Of course, this is all in jest, and LEGO will likely provide some compensation, if only for the Twitter bants and good press. But still though, outrageous. This man was in Event Horizon and Possession, two of the best horror movies of all time. Respect where it's due.

Neill is returning to the Jurassic franchise in next year’s Jurassic Park: Dominion. the action movie sequel is bringing back many of the original cast for a blowout to end of the Jurassic World trilogy, that’s been led by Marvel Cinematic Universe favourite Chris Pratt.

OUTRAGE! So signing this ⁦@LEGO_Group⁩ box for charity today. And I see beside each model a shot of the actor. Cool. Jeff ! Laura! But instead beside Alan Grant figure there’s a … what!? No It IS ! A TOILET! Insulting? Hilarious? Explain! Amends! pic.twitter.com/Y3CHo9eqxy

Jurassic World: Dominion is directed by Colin Trevorrow, from a script by him, Emily Carmichael, and Derek Connolly. We don’t have a trailer yet, or much of anything else, but we did get an IMAX preview with screenings of Fast 9. Perhaps Neill’s complains will kick Universal into gear.

In any case, Jurassic World: Dominion is in theatres June 10, 2022. Here’s the best adventure movies to get into the spirit of things in the meantime. 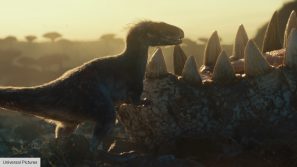 Jurassic World 3: Dominion release date, cast, and everything else we know
Get involved Continue the conversation over on The Digital Fix Forum