The Continental isn’t getting any new management for John Wick: Chapter 4. Ian McShane has closed a deal to reprise his role as Winston for the action movie sequel.

Deadline reports that McShane and studio Lionsgate have come to an agreement for him to return. McShane’s Winston had previously appeared as the manager of the Continental, the hotel Wick and all his fellow guns for hire use as a safehouse, in all three John Wick films to date. Director Chad Stahelski, creator of John Wick, gave a statement talking about how delighted he is to have Winston back on board.

“I couldn’t be happier than to welcome Ian McShane back to John Wick: Chapter 4,” the director said. “He is not only an amazing actor but is an indispensable collaborator who has helped define the world of John Wick.” Production started on John Wick 4 only recently, with the movie’s official Twitter sharing an image of a director’s chair to signify that filming had begun. Wick’s fourth chapter is shooting this summer in France, Germany, and Japan, for a theatrical release in the first half of next year.

McShane has a long list of credits in film and television, and he’s appeared in several of the best TV series of all time, including Deadwood and American Gods. He joins Donnie Yen, Marko Zaror, Hiroyuki Sanada, Bill Skarsgard, Rina Sawayama, and of course, Keanu Reeves, who returns as Wick himself.

Not much is know about the plot of John Wick: Chapter 4. When we last left our titular hitman, he wasn’t in a good way. Stahelski is directing from a script by Shay Hatten and Michael Finch.

John Wick: Chapter 4 is due to release theatrically on May 27, 2022. For more wham-bam adventure, why not check out the Fast and Furious movies. 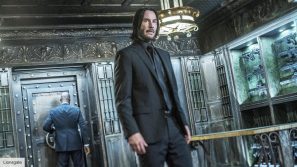