Last week Sony Pictures delayed Venom 2 and bumped Hotel Transylvania 4: Transformania off the release schedule. Now, in news most people saw coming, it’s been announced that the animated movie has been sold to the streaming service Amazon and will be skipping theatres entirely.

Variety broke the news, reporting that Amazon paid a whopping $100 million for the cartoon horror movie. This might seem like a significant chunk of change, but the Hotel Transylvania series has earned more than $1.3 billion at the global box office, so the streaming giant clearly sees it as a good investment. There was speculation that Netflix would snap the film up – it’s been home to other recent sony animations, The Mitchells vs. the Machines and Vivo – but Amazon is reportedly looking to improve its back catalogue of animated movies.

The recent surge in Covid-19 cases in the US has made releasing family movies in theatres pretty much untenable. There’s currently no vaccine for those under 12-years-old and with cities across America considering bringing in vaccine mandates for indoor venues, the future of kid’s movies looks bleak unless they release on streaming.

Transformania is being billed as the final chapter in the Hotel Transylvania series. The comedy movie will see Drac and his ghoulish gang transformed into humans by Van Helsing’s new invention, the Monsterfication Ray. While Drac and the gang are literally defanged by the ray, Johnny, Drac’s son-in-law, will be transformed into a monster.

While the kid’s horror movie may be the last hoorah of the Hotel gang, two members have ducked out early. Adam Sandler and Kevin James won’t be reprising their roles of Dracula and Frankenstein. They’ll be replaced by Brian Hull and Brad Abrell, respectively. The rest of the A-list cast, which includes Andy Samberg, Selena Gomez, Kathryn Hahn, Jim Gaffigan, Steve Buscemi, Molly Shannon, David Spade, and Keegan-Michael Key, will all be returning, though.

Hotel Transylvania: Transformania will premiere on Amazon Prime at some point in the future. If you’re interested in checking out what Prime Video has to offer, you can sign up for a thirty-day free trial here. 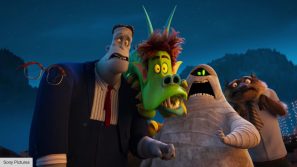