Few villains have as a distinctive appearance as the big baddie of the Harry Potter franchise, Voldemort. However, although fans may now associate the character with the bald and slit nose look of Ralph Fiennes (first appearing as Voldemort in the film The Goblet of Fire), the initial incarnation of the Dark Lord was far more terrifying than you may originally think.

Cinephiles first saw a glimpse of Voldemort in the family movie Harry Potter and the Philosopher’s Stone, when Professor Quirrell removes his turban and reveals the Harry Potter villain co-existing on the back of his skull. Initially voiced by Ian Hart, the animated face is already eerie enough, but the original concept for the skull-sharing wizard was even more disturbing and monstrous.

On the subreddit r/interestingasfuck, photos of the first design for the Quirrell/ Voldemort face were shared. In the pics, the Harry Potter character’s face is more defined, filled with pointed teeth and has what looks to be a snake-like detachable jaw. The caption on the Reddit post reads: “This was the first-ever design of Voldemort, which many find far more terrifying”.

The design is undoubtedly leaning more toward horror than what is typical of the fantasy movies in the Harry Potter series.

the first design of what voldemort was supposed to look like. thank god they didn’t chose this one… imagine the trauma. i had enough with the screaming book. pic.twitter.com/diNCTUwYTO

The Dark Lord is sporting inhuman razor teeth, and has striking sunken-in eyes. In fact, the face almost resembles the giant snake monster, the Basilisk, in the second Harry Potter movie, The Chamber of Secrets, with its scary reptilian qualities.

Many users commented under the Reddit post agreeing that this initial design for Voldemort was “far more terrifying” than the one we see in the film. One user commented: “Damn I was already scared of the design they went with as a child. This would of straight-up traumatized me.”

On the other hand, there were some who voiced that they preferred the more toned-down approach that the Harry Potter team ultimately went with for the character.

“It’s far more terrifying that Voldemort has a face that’s slightly yet distinctly not human,” a commenter writes. “He looks like a human where something has gone wrong.”

While it is fun to think about a more monster-like Voldemort, we are happy that ultimately the team stuck to their simpler design, as it allowed Fiennes (once he began to portray a live-action version of the character) to still have his face somewhat visible instead of drowning in prosthetics.

We can only imagine how much more anguish he might have gone through with giant teeth and sunken eyes added into the mix of his Voldemort preparation routine. 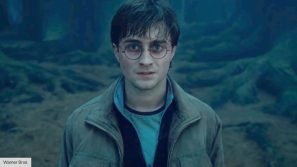