A new trailer for Jason Reitman’s Ghostbusters: Afterlife has just dropped online. A sequel to both the original Ghostbusters and Ghostbusters 2, the movie picks up thirty years after Vigo the Carpathian’s attack on New York City. In the intervening years, the Ghostbusters have become something of a myth since the “Manhattan Crossrip of 1984”.

Afterlife follows Callie (Carrie Coon) and her two kids Phoebe (Mckenna Grace) and Trevor (Finn Wolfhard), who, after being evicted from their home, moves to the small town of Summerville. While there, Phoebe and Trevor “discover their connection to the original Ghostbusters and the secret legacy their grandfather left behind. Soon after the family arrive, the town starts experiencing ghostly goings-on, and the siblings assume the mantle of the now-forgotten Ghostbusters.

Director Jason Reitman (Juno), the son of Ivan Reitman, the original Ghostbusters’ director, has described Ghostbusters: Afterlife as a “movie about a family, that’s being made by a family. That’s as much about the passing of the torch metaphorically as it is about passing a proton pack.”

He came out here for a reason. Watch the new trailer for #Ghostbusters: Afterlife, exclusively in movie theaters this November. pic.twitter.com/MGwhEbyqAW

Ghostbusters: Afterlife is currently scheduled for release on November 11, 2021. Like many movies, this year, Afterlife was supposed to come out last year; however, the global pandemic stopped those plans. 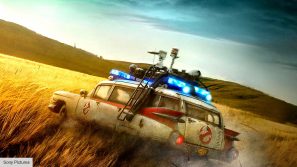 Ghostbusters: Afterlife release date, trailer, cast, and more
Get involved Continue the conversation over on The Digital Fix Forum