Big Finish has developed a knack for identifying gaps in the Doctor Who timeline to insert new storylines and characters. One such period that was hinted at onscreen in Turn Left and The Stolen Earth – but you would not have expected to see any more of – was Rose Tyler’s attempt to return from a parallel universe to find the Doctor.

Now, Big Finish has developed that universe-hopping plot point into a solo series for Rose herself, starring Billie Piper alongside Camille Coduri and Shaun Dingwall.

Rose Tyler: The Dimension Cannon is directed by Helen Goldwyn and available from the Big Finish website until general release at the end of November 2019. Here is the synopsis:

As she begins a desperate mission to find the one person who can make a difference, Rose discovers that it’s not only her universe at stake. Across alternate dimensions, parallel timelines – where divergences may be tiny or cataclysmic – every Earth is under threat.

Time is running out, but Rose won’t stop searching until she finds the Doctor…

The Endless Night by Jonathan Morris

As his parallel universe darkens, Pete Tyler has found a chance of survival. Punch a hole through dimensions and someone can jump through – and maybe find a way to the Doctor’s universe.

On her very first trip, Rose visits an Earth that’s about to get colder. As a long night begins, Rose meets different versions of her parents. And one man who could help her search. His name is Clive…

The Flood by Lisa McMullin

Making another leap with a new companion, Rose finds a world suffering environmental change. The rain won’t stop, and the government could be hiding the scale of the impending disaster.

While Rose connects with another version of Pete and a strangely compelling young man, Clive meets someone special of his own. In this world, there was no Clive for Caroline to meet, but love can cross dimensions.

Pete decides it’s time he accompanied Rose on one of her dimension jumps. But he couldn’t have picked a worse time. They arrive in a world where technology took an extraordinary path, and where the recently deceased Pete Tyler had a very different kind of success.

As machines start to break down, Pete meets his widow, and he and Rose must confront truths about their ‘family’. But they may not escape this Earth alive.

The Last Party on Earth by Matt Fitton

Rose and Jackie visit a home very close to the one they left behind. But some old friends are missing, and some are unexpectedly present… Rose meets two young men she knows should be together – it can sometimes take the end of the world to see what’s right in front of you.

Meanwhile, the Powell Estate faces Armageddon in the only way it can – by throwing a party.

The series gets straight to business with Rose making experimental jumps into parallel universes, exploring the different variances to discover if any of those universes leads to the Doctor. Billie Piper manages to clearly distinguish the Rose of series four from the Rose who travels with the Doctor, who might be less confident or forthright on her own.

Meeting alternate versions of her parents is by turns heart-warming, funny and chilling. Parallel-Pete and parallel-Jackie are drawn together with Rose and Clive just as the threat of the story – and of the overarching series – becomes realised: “the stars are going out”, the endless night is approaching as the sun has suddenly disappeared. As the apocalyptic terror sets in and the city landscape darkens, the episode is raised to another level, one that is truly dark and terrifying.

Seeing as this is his first time playing the role in 13 years, Shaun Dingwall gets a lot to do in his return as the original parallel universe version of Pete Tyler. This version is confident and executes the dimension-crossing plan with expertise. It is a far cry from the embarrassing, bumbling dad of Father’s Day, and he and Piper share a great father-daughter dynamic.

Camille Coduri’s parallel-Jackie comes across a little flat in her performance, although this may have been intentional to show the more downbeat, apathetic side to that version. Despite this, Jonathan Morris provides a decent introduction to the crux of the series. The Endless Night’s slow pace and climactic moral conundrum are engrossing, complemented by an unobtrusive soundtrack and a terrifying set of plot ideas.

The Flood brings the next inter-universe jump, this time with Clive in tow. Writer Lisa McMullin continues the themes of family, other lives and the essence of existence as Rose meets a male version of herself and Clive his would-be wife Caroline.

As with The Endless Night, much of the runtime is devoted to exploring the similarities and differences in personality of the main characters of the new universe. This valuable character work means that the ‘plot’ of the story only really gets going in the second half. Celestial disruption has altered the weather of the planet, exacerbating the human-induced effects of severe climate change – fusing the science-fiction motivation for this series with a very real and current environmental concern.

As per what was advertised about the set prior to release, the characters are front and centre. Joe Jameson as Rob (Mickey’s boyfriend!) and Elli Garnett as Caroline both do well as guest stars. Julia Hills’s performance as Prime Minister Margot Kinnear is a hint at Penelope Wilton’s Harriet Jones, and is a passable antagonist.

The Flood does something fresh with how open Rose is in divulging where she is from – commonly in a story like this, the subterfuge would continue for much longer, perhaps testing listeners’ patience. Instead, McMullin cuts to the chase and folds in multiple storylines, including Rose’s quest to find the Doctor, her dynamic with Rob, the climate change theme and the love story between Clive and Caroline. This last part, sandwiched in between the rest, is abbreviated and is made to develop swiftly, but nonetheless proves heartwarming.

AK Benedict’s third story arguably is the standout in terms of concept and ideas. A thrilling cold open precedes an engaging combination of technology-gone-wrong, murder mystery and family. The failed entrepreneurial exploits that characterised the original Pete are reversed, with his inventions and genius being celebrated and leading to huge success.

After being sidelined in episode one and absent in episode two, Jackie’s presence is felt once more. Camille Coduri is at her best when given real and human emotion to play, which is provided in this and the following episode in spades. Her endearing irritability and irreverent sarcasm – tempered by an inherent warmth – are part of the essence of the character, and unpacking that is a smart decision.

One of the best things the story does is take the core concept of crossing dimensions and make it an openly known fact for the characters of the world being visited, thereby cutting out much subterfuge and exposition, which would get tiring if it happened in every new episode. Another standout aspect is the notion of family – the proposition that the Tylers will be family in any dimension.

On the other hand, the mix of humorous and serious scenes is sometimes jarring. Perhaps Ghost Machines would have benefited from going fully in one direction or the other. The resonant character work, for instance, is particularly strong, as are the themes of mortality and loss. Ultimately, however, the combination of light and dark, often right up against each other, makes it all feel very 2006 Doctor Who – which is a good thing.

The Last Party on Earth

The Last Party on Earth is a love story at the end of world, with the everyday domesticity of the Powell Estate fusing subtly with the series’ apocalyptic undertones. The queer romance at the centre of the story is moving and developed well, and is very Russell T Davies.

Rose and her mother are the ones to make the jump this time. Jackie is at her most real when connecting personally with neighbours, or when making an impassioned plea to troublemakers. Her time at the council estate are partially expository, but primarily a means to explore the thematic concerns of what one does with their remaining time knowing the world will soon be ending.

Waleed Akhtar and Syrus Lowe – as Mook Jayasundera and Patrice Okereke, two characters who appear in the novelisation of Rose – share a fractious relationship to begin with, but slowly, rewardingly, the puzzle pieces slot into place. There is less Pete (and no Clive), but Mickey Smith’s presence is felt, despite Noel Clarke not featuring within the drama.

Matt Fitton’s script brings Rose Tyler’s string of solo adventures (insofar as she is going solo without the Doctor, but with her family) to a slow, meaningful close. No extraterrestrial presence, little talk of why the world is ending; the who and the how are what matters here. Who the characters truly are, and how they live their lives in their final moments.

Producer David Richardson kicks off the behind-the-scenes interviews by exploring the origins of the series and the unexpected changes that occurred in the planning and storyline phases when working with Russell T Davies. Various other actors provide anecdotes, from memories of shooting Rose to the quest to track down Elli Garnett online so she could reprise her role.

Billie Piper is lauded for her skills as an actress by Camille Coduri in particular, but the entire main cast, reunited here, is enjoying being back. Piper also highlights the family component to these stories, hitting the nail on the head in terms of tone and showing her understanding of the series she is leading.

Joe Kraemer’s main theme captures in a nutshell the curiosity and wonder that bled through much of composer Murray Gold’s score for the 2005 and 2006 series. The main leitmotif in particular takes a page directly out of Gold’s book that harkens all the way back to Rose.

Rose Tyler’s series of adventures does not always go in the direction that might be expected of a Doctor Who spin-off, choosing to unpack the humanity of individuals more often than pitting them against villains. Piper and co bring an assured talent and understanding of the roles they are playing. They help to colour in and bring life to a bleak apocalyptic backdrop in four evocative stories. 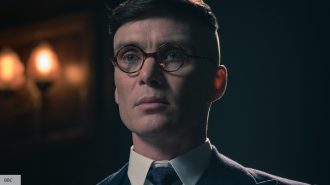