Some games cannot properly be done justice simply by assigning it a genre label. The Creature in the Well by the folks over at Flight School is without a doubt one of those games. Based on the description from the developers, it is a ” hack-and-slash dungeon crawler” by genre-based attributes. If we expanded this to say what you ACTUALLY get to experience in this game, however, I would describe it as a hack-and-slash dungeon crawling isometric puzzle game with pinball elements starring a robot. Doesn’t quite roll of the tongue as well, but that is the best we can do to encapsulate this experience. 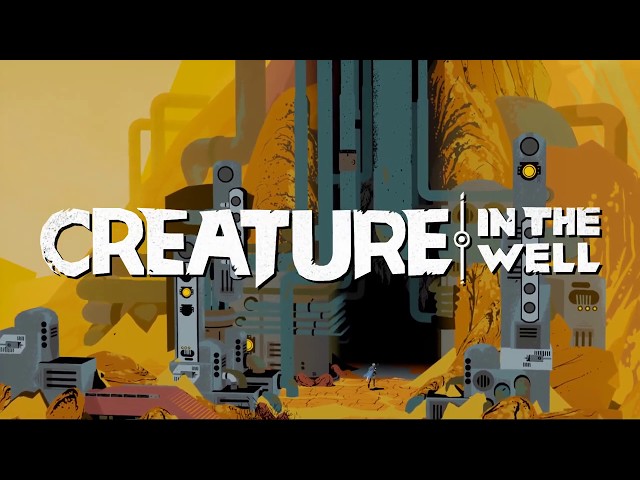 The story of The Creature in the Well centers around a small town continuously buffeted by a raging sand storm they refer to as, well, the Storm. While further lore bits are introduced throughout the game, essentially it appears that at one time a collection of robotic engineers called BOT-Cs were working on creating an enormous weather machine within a mountain in order to relieve the suffering town from the unending storm. However, these engineers awoke a creature during their efforts, one not quite fond of its mountain being disturbed, and were subsequently wiped out by said creature. Thus, the game begins with the player assuming the role of the last BOT-C in existence waking up in the sand, and venturing forth into the accursed mountain in an effort to get the mechanisms moving again.

From time to time you are given glimpses of the creature, mostly in the form of glowing eyes and reaching hands. Additionally, the creature enjoys engaging in periodic taunting of the player in order to try and further discourage assaults on its mountain.

As was already so eloquently stated above, The Creature in the Well‘s game play consists largely of hacking and slashing at energized pinball projectiles. This mechanic, while initially difficult to wrap your head around, actually works quite seamlessly as the game progresses. The bulk of your actions will be control by either gathering up and charging projectiles with your sword item, or bashing said projectiles forth with your pipe. And while whacking around electrified projectiles sounds entertaining in itself, the actual purpose of doing so is the heart of the game. Your BOT-C is tasked with using said projectiles to charge up various bits of equipment throughout the mountain, including some that shoot back, in order to progress with starting up the weather machine.

Your initial sword and pipe will eventually be supplemented by other items for said slots, though not necessarily as an upgrade in the traditional sense. Instead, each item option gives slightly different abilities for different situations, such as giving your sword-slot item the ability to quickly recharge previously charged projectiles, or to essentially have a laser sight to aid in aiming. The ability to aim accurately is paramount for many encounters, as rather than simply having to hit a few items, you will need to hit said items in particular orders and within increasingly tight time frames. This ability to quickly and accurately react is especially important when battling the creature in boss fights or trying to unlock secret paths for item upgrades

While other recent games have utilized similar art styles to The Creature in the Well, the execution here was nearly perfect. The isometric camera angle worked smoothly, without any instances of struggling due to not being able to see what I was doing. Any mistakes encountered were purely player error. Additionally, each of the eight “dungeons” of the factory, while similar in style, were presented with enough color and puzzle variations that each one was fresh in its own way.

brand
The Creature in the Well | The Digital Fix