Sword Art Online has been a fan favourite franchise since 2009, ranging from light novels, anime and manga adaptations, and a multitude of video games. The latest of these entries, Sword Art Online: Alicization Lycoris, roughly follows the third season of the anime and 9th through 18th volumes of novels. Alicization Lycoris was developed by Aquria and published by Bandai Namco. Both of these companies have had their hands in the development and publication of many SAO games in the past, though this is not a guarantee of success given the severely up and down quality of past games. Let’s take a look at how they fared this time around. 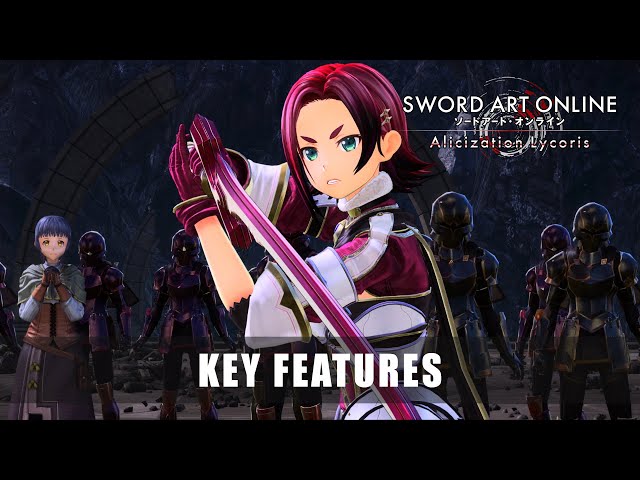 Sword Art Online: Alicization Lycoris starts out with a short but chaotic battle between our ever-present hero Kirito and the Administrator. Following this intense clashing of foes, the game shows Kirito waking in the middle of a forest of the virtual world Underworld. He has no idea where he is, how he got there, and more importantly how to logout and leave. While this seems quite familiar as a beginning plot, it works perfectly within the universe of SAO, with the game feeling like returning to a happy place. It seems like a similar experience for Kirito, as this mysterious new world triggers frequent senses of familiarity.

The story progresses after some wandering connects Kirito with Eugeo, who describes Kirito as a Lost Child of Vecta, what the people of his world call people who just show up without knowing where they are. Kirito is perplexed by Eugeo and the other inhabitants of Underworld, realizing they are AI characters yet they behave in surprisingly human ways. Eugeo describes the loss of his beloved Alice, takes Kirito under his wing, introduces him to Alice’s sister Selka, and our story truly begins.

Sword Art Online: Alicization Lycoris has made some much needed improvements over previous games in the combat department, though the system is still not perfect. The training for battles is seamlessly integrated into early parts of the game, though only on a surface level. This will be perfectly fine for many players, though more strategic players will need to take the time to delve into the system a bit to reach their desired control level. For example, at least for the first chapter of the game, not much thought needs to be put into battles to come out on top. I found this valuable as it allowed me to become more comfortable with the flow of battle before stepping things up, though it did have the occasional side effect of feeling monotonous. If you so desire, the battle system can become incredibly deep when it comes to programming the behaviors of your AI teammates, though this is only necessary if you desire a richer battle experience. If you instead are playing primarily for the story, basic battle know-how will get you quite far. Regardless, there are dynamic options that can increase battle enjoyment, ranging from skill trees to combat skills and Sacred Arts, all of which blossom nicely as the game progresses.

Gameplay is standard action JRPG fare. I did enjoy the various diversions offered, including fishing, cooking, side quests, and reputation building. Speaking from extensive experience, it is quite easy to get lost into these side tasks, so keep that in mind if you ever forget that there is an actual story to explore. I also felt that Sword Art Online: Alicization Lycoris did an excellent job of simulating the MMORPG nature of SAO. There are gathering mechanics, quest givers, fast travel options upon discovery, and of course actual online play. However, if online play is something that you are looking for in this game, hopefully you have a bit of patience as many of the more exciting aspects of the game are gated behind an approximately 10-hour first chapter.

Sadly, all of the excellent aspects of Sword Art Online: Alicization Lycoris are tainted by a few glaring issues. First and foremost, I would be remiss if I did not mention the loading times. For playing this on a new PC, well above the recommended requirements, having upwards of 5 minute load times felt a bit excessive to me. Further darkening this issues is the fact that many things in game require loading times, including traveling from one area to another, cinematics, and even just quick conversational cut-scenes that occur all the time. Following a quick internet search, it seems this is a common experience for all players at this time. There was a recommended “solution” for PC players, though this involved reducing FPS and graphical quality settings. Hopefully this is simply an optimization issue that can be patched after release, otherwise this will turn many players away.

Much less of an issue, though still worth noting, involved the controls. While for the most part everything plays out smoothly in battles, there are some hiccups from time to time with responsiveness of controls. At times it seemed like I had to hit the same button several times for it to respond, targeting particularly, though it may have just been a too slow response. At other times, some movements seemed overly responsive, shooting my character all the way across the screen and out of battle.