Super Monkey Ball: Banana Blitz HD, remake of similarly named Super Monkey Ball: Banana Blitz for the Nintendo Wii, is Sega’s sixteenth entry (not counting non-HD remakes and mobile ports) in their tilt-based monkey magic. Unfortunately, this is a HD remake of a game that received mixed reviews, adding to the pressure on the latest entry to perform. So how well did they do, and were the previous wrongs adequately righted? The most notable difference surrounds how you control the game itself. The Wii version was plagued with inconsistent, often frustrating motion controls. This time around, whether due to the game being available on non-Nintendo systems or just a design choice, controls are strictly non-motion based. 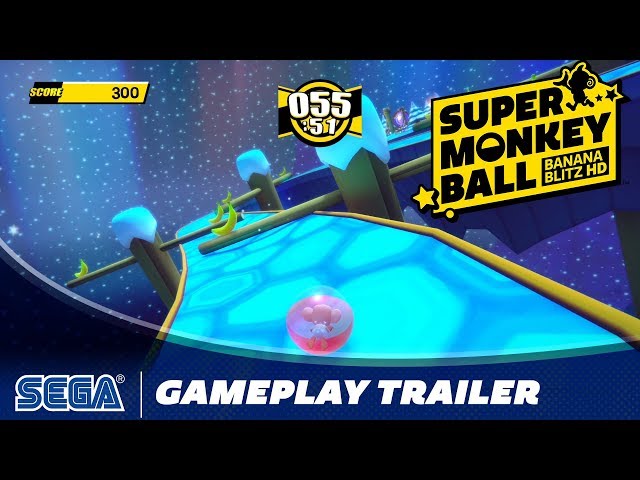 If you are not familiar with the original Banana Blitz outing, or any part of the Monkey Ball franchise, gameplay consists of, well, monkeys in balls. More specifically, the player is tasked with navigating said monkeys in balls through twisting, turning, and treacherous courses in the hopes of reaching the goal. Scattered throughout the courses are bananas to collect and obstacles to avoid, shortcuts and challenging paths, all in a colorful, gravity- and momentum-based wonderland. Unlike some of the other entries in the Monkey Ball series, Banana Blitz also features quirky boss fights to battle through. Each world consists of eight regular levels, one bonus level, and a boss level themed around the rest of the world. Though battling bosses trapped in a hard to control ball is not ideal, I can say that all of the bosses and their mechanics were unique enough to make the challenge enjoyable for the most part.

Throughout my time with Super Monkey Ball: Banana Blitz HD, and throughout all of the games worlds, I was sadly plagued by the same two nearly game-breaking complaints. For one, the controls of this game, while simple, are so sensitive and twitchy that the already challenging difficulty of some levels was exponentially increased simply due to a subtle variation in movement. Granted, this is part of the gimmick of Monkey Ball games. The player is supposed to become one with the monkey ball and fluidly move throughout the levels. I could get behind this, and as I played further and further into the game I even found this becoming more natural of a control scheme for myself. Unfortunately, this is where the second nearly-game-breaking complaint comes in: the camera. The camera seems to move of its own accord, whether based on which direction you were moving or just to make you made I can’t say. Worst of all, there is no way of recentering or moving the camera! You are able to make the camera line up behind you by going in a particular direction for a bit, sure. But on some levels (I’m looking at you, Cobalt Caverns!), I found myself needing to reverse the camera on tiny platforms, with no room to really moving, in order to make overly precise jumping decisions.

A hallmark of a good Super Monkey Ball game, in my opinion at least, has always been the exceptional fun of gathering a group of friends and playing wacky monkey-in-balls mini-games. I fondly remember tears of joy and frustration, exclamations of victory and vexation, and all around good times playing the likes of Monkey Billiards, Monkey Golf, and Monkey Bowling. Sadly, none of these games made it into Banana Blitz. In fact, while the original Wii version of Blitz featured a whopping 50 mini-games to play, the HD remake has pruned the list down significantly to a mere 10 mini-games. This is not completely a bad thing, though. There certainly was a fair amount of mini-game bloat in the original. Along with the decision to remove motion controls completely from the HD remake, taking out the less great games and incompatible games prompted said decreased list. Unfortunately, the 10 games that are included just did not give the same sense of enjoyment that the classic games offered. Some games, such as the hovercraft-based game, were so tedious and had such finicky controls that everyone I played with kept hoping someone would get lucky just to end the misery! Granted, a few games were enjoyable. Fun times were had with Monkey Seesaw, and the classic Monkey Target made a return as well.