Star Renegades, developed by Massive Damage and published by Raw Fury, is described as a “tactical roguelite rpg.” Combining procedurally generated elements, turn-based tactical strategy, and gorgeous graphics, this game has a lot to live up to following Massive Damage’s previous title, Halcyon 6. 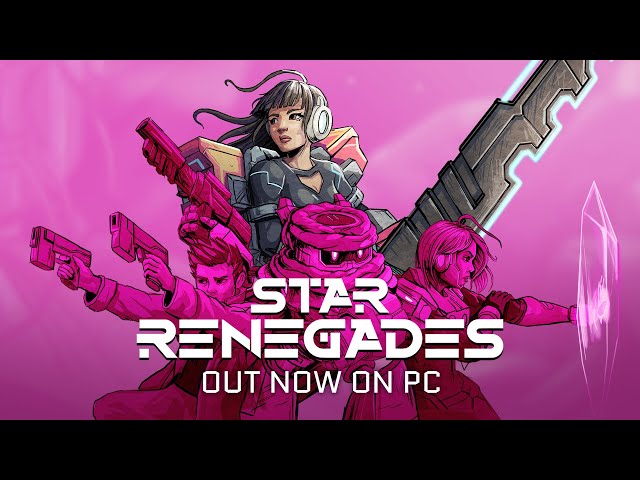 Before getting to the excellence of this game, I have to address the less than excellent. From my experience, depth of story when it comes to roguelite titles is a bit hit or miss. Unfortunately, Star Renegades’ is more of a miss. The story starts off interestingly enough, if a little trope-ish. A renegade group is rebelling against the evil Imperium, and within the opening scenario a renegade hero is devastatingly defeated.

An interesting element that was included in the story to help explain the procedurally generated terrain and enemies is the use of metaverse travel. Whenever the player loses all of their party members, and you WILL lose all of your party members in the beginning at least, the player controlled droid jumps to a new timeline to try again. However, this also becomes a bit tiresome after some time. The side dialogue could be described as stale in general, but to then have to repeat the same dialogues every timeline gets old quickly. For example, having restarted the first mission several times until I got the hang of things, I decided that I never wanted to hear about giant mushrooms again, old temples smelling like giant mushrooms, and enemies constantly commenting about how disgusting we look!

If you are able to overcome the stale dialogue, Star Renegades truly is an excellent game. Where it shines is obviously the combat, so the story is more filler between battles anyway.

Gameplay outside of combat consists of your party traversing random terrains on different planets for the purpose of completed the mission at hand. For example, the first major mission is to get to an objective location within three days in order to battle a behemoth, or Imperium boss character. Even moving around the map involves a fair amount of strategy as only three new sections can be opened per day. Additionally, depending on which paths you take, other paths may be locked up permanently. Paths have the potential to contain new equipment, armor and shield upgrades, money, and so on. Additionally, most areas contain a battle in order to help the party level up, as well as a set of Imperium generals to defeat. If these higher ups defeat you instead they are promoted, level up, and will be that much more difficult to defeat in subsequent timelines.

Combat itself is both complex and approachable at the same time, somehow. Initially there are many different stats, tactical considerations, and defensive concepts to master, but once you get the hang of these elements combat becomes more of a rewarding challenge than a difficult trudge. Rather than a typical turn-based combat in which battle goes back and forth between players and enemies, Star Renegades utilizes a system in which you are shown what the enemy plans to do and then react accordingly. There is a stagger mechanic where, if attacks are planned appropriately, you may be able to stop the enemy from attacking at all. This has a limit though, so you will have to eventually deal with getting attacked. Different classes have different support abilities to smooth this over, such as reflecting damage back, guarding other allies, and so on. With a strategically planned party, which expands with many new faces as the game goes on, it is possible to have the Imperium at your mercy rather than the other way around.