Read our review of Pokémon Shield, a great addition to the ongoing creature catching series. 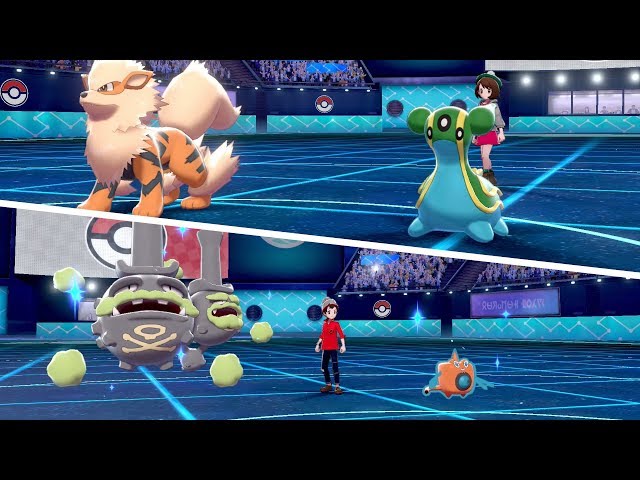 Pokémon Sword and Shield represent Game Freak’s eighth generation of Pokémon, as well as the first main series Pokémon game to make its way to home consoles. Sure, we have been given the Stadium and Colosseum series in the past, and Let’s Go got us closer, but Sword and Shield are truly meant to take console gamers on a more traditional Pokémon adventure. But is it an adventure worth taking?

Sword and Shield start off in the picturesque, UK-esque, Galar region. Apart from the change in locale, I was presented with pretty standard Pokémon fare. Following creation of my character, the game opens up with a cinematic showing the current champion, Leon, entering his latest battle to great fanfare and excitement. Immediately following, the player’s friend Hop, hops into the room and convinces you to join him in welcoming his brother, champion Leon, back home. Rather than immediately meeting with a professor, the player meeting with Leon serves as the impetus for your Pokémon adventure, even down to Leon offering you your first Pokémon. Cue the standard go-tell-your-mom-you-are-going-on-an-adventure sequence, followed by meeting with Hop and venturing forth.

Speaking of Hop, not quite sure how I felt about that friend/rival dynamic. Sure, past generations have all featured either a friend/rival in some fashion, but Hop seems to go above and beyond in so many ways. He seemed to pop up tremendously more often than the rivals in previous games. Of course, it may have actually been the same frequency, but given how hyper and over the top everything Hop did and said was, it seemed more overwhelming than it should have been. He turned any and everything he could into a race and I quickly lost count of how often he bragged about being the next champion. It made things a bit awkward when everyone would focus praise on myself as the player rather than Hop, though I think he was clueless enough that it didn’t really matter.

While the story itself was not monumentally revolutionary, there were changes throughout that helped to spice things up enough to keep me engaged. The central process of traveling the region to defeat gym leaders remains, though the addition of gym missions were new. Each gym’s theme influences the mission, such as having to redirect water flows in the water-type gym, or racing against other trainers in a heated competition to defeat or collect Pokémon in the fire-type gym. Completing each gym mission is required to challenge the gym leaders, subsequently furthering your path to reach the championship.

Another interesting addition, given that the gym challenge is more related to a sports-based tournament this time around, is the addition of fellow gym challengers throughout the game. Instead of just feeling like a solo-trainer traveling around gathering badges, meeting with and sometimes battling with fellow gym challengers was a nice change. And, given the fact that there is no Elite Four to look forward to in Sword and Shield, it is at least good that some more personality has been written into the gym championship process.

A divisive topic for many players of the Switch’s first foray into the Pokémon RPG realm, Let’s Go Pikachu/Eevee, was the battling (or lack thereof) and capturing of wild Pokémon. Rather than traditional battles wearing down a wild Pokémon prior to tossing a Pokeball at it, catching new Pokémon to add to your team in Let’s Go was instead dependent upon throwing prowess. Thankfully, Sword and Shield went back to the standards of previous generations that players know and love.

What did carry over from the Let’s Go games was how Pokémon appear in the wild. In Shield and Sword you are able to find Pokémon randomly by walking in tall grass as usual, though each area has some Pokémon visibly wandering around that can be approached specifically to battle. Some Pokémon are more aggressive and will even chase after the player, while some Pokémon found in The Wild (a specific area in the game) are noticeably larger and more powerful than others, representing an added challenge.

The Wild is also where you first encounter the new Dynamax mechanic. Finding Dynamax Dens scattered about The Wild allows the player to queue up to take on some gigantic creatures along with three other trainers. If you are lucky, you will find players in the area that can be invited to take on these raid battles with you, significantly improving your success chances. This connectivity seemed to be a bit lacking during my play through, however, as I never successfully got an invite-raid to work despite many other players being around. Thankfully there is an option to play with bot characters instead, though the shear RNG of the Pokémon they bring can either be a help or a hindrance.

Sadly, despite Pokémon Shield (and Sword) being a solid game in my experience, its launch, and even pre-launch through leaks, has been thoroughly tainted with fan lash-back. While I will not get wrapped up in the “#GameFreakLied” and “#Dexit” trends here, I feel that some complaints deserve to be mentioned. Yes, the Pokédex is substantially smaller, particularly with no national Pokédex available to work towards. The quality of the Pokémon added in mostly made up for missing classic in my experience at least. However, whether I just got lucky with my discoveries or not, it almost felt like finding pokemon to fill up the Pokédex was entirely too easy. I had a solid 50 to 60 unique, captured Pokémon in my arsenal prior to even getting to the first gym.

Finding different Pokémon was not the only thing that felt too easy though, which was my main complaint about my time with Pokemon Shield (apart from the insufferable Hop at least). As a person who has played every generation since generation one, I have always valued how initial approachable the games were and then the significant difficulty increase in later/post game battles. Shield failed to truly offer that challenge. Some quality of life changes have added to this lack of difficulty, such as Share EXP permanently being on as well as the ability to swap out Pokémon without having to go to a computer. But even without these additions, winning battles was usually way too simple. It was well after the third gym before I even got close to losing a battle, no matter what the makeup of my team was.